It is now well-known that public sector banks are the worst performers in the banking system. Investors have punished these lenders for the massive bad loan stockpile they have amassed over the past two years to become loss-making businesses.

In contrast, private banks posted better quarterly results and managed to avoid red ink on their ledger. However, it is important to separate the wheat from the chaff in the private sector space and find out whether private lenders can sustain their good results for another year.

Of the 17 listed private lenders, four saw profits decline sharply from a year ago despite expectations being that optically profits would show growth. Recall that March 2016 was marked by a sharp fall in profits due to the Reserve Bank of India’s (RBI’s) asset quality review. 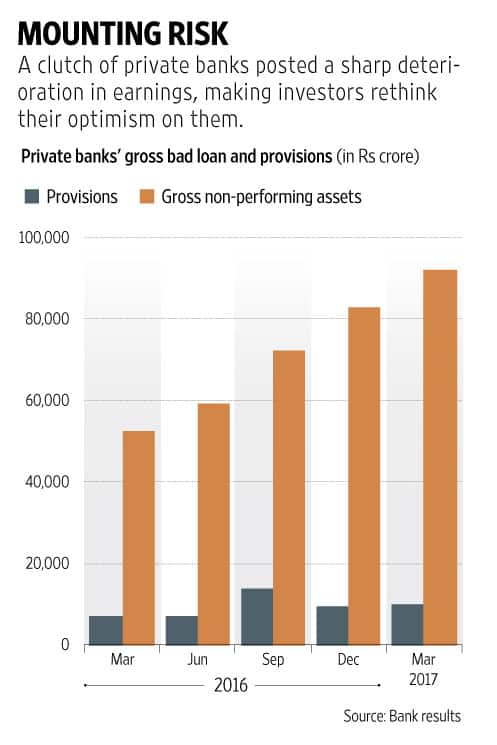 Further, the 75% surge in bad loans of private banks was driven predominantly by just two lenders. ICICI Bank Ltd and Axis Bank Ltd together accounted for 80% of the total rise in gross bad loans. However, it would be unfair to focus only on these two as their sheer size and corporate exposure makes them that much more vulnerable to bad loan accretion than others. Four more lenders—Yes Bank Ltd, Jammu and Kashmir Bank, Karur Vysya Bank and IDFC Bank Ltd—reported their bad loans had more than doubled. These six lenders make up for the dark corner of the private banks’ earnings landscape. What this shows is that private lenders have been slow in recognizing bad loans, keeping themselves open to risks.

Despite all this, private lenders are still better off than public sector banks. The March quarter results of public sector banks have not been less horrifying than previous quarters. Government-owned lenders have managed to amass a bad loan stock of Rs6.2 trillion to cover which they had to cough up close to Rs3.44 trillion in provisions. The end result is nine loss-making banks and an 83% drop in profits collectively.

The consensus estimate of earnings per share for fiscal 2018 of BSE Bankex is 30% lower as of March 2017, compared with March 2016, and that of the Nifty PSU Bank index has dropped 61%. This is enough to show the pessimism among investors.