Home / Opinion / Online-views /  Are you a credit card fraud victim?

Are you a credit card fraud victim?

It may take a long-drawn process before your money back, so be very careful when banking online.

* On 21 January, Raj Mohan, a Bangalore-based IT professional, noticed an SMS he had got from his bank on 19 January. Considering it came on a holiday, he had not paid much attention to the message earlier. It read that a transaction for $174 (about 10,000) had taken place through his credit card. “I immediately informed my bank. They said they would investigate the matter."

* On 20 January at 4 am, Ajinkya Hire, a Pune-based IT professional, got an SMS from his bank, stating that a transaction had taken place on his credit card. Says Hire, “The transaction was for around 23,700, while my limit was only 20,000." It was only later that Hire realized that his bank gives a bonus limit. He lost around 25,000, including extra charges for exceeding the limit.

Last month, Mint reported that Indian credit card holders are increasingly becoming the target of online fraud with thieves using the cards frequently on sites abroad, which raises questions about how secure bank data is. The report also said that banks, including State Bank of India, ICICI Bank Ltd and Citibank, have been witnessing such kind of fraud.

Says Uttam Nayak, group country manager—India and South Asia, Visa, “You need to be careful while using credit cards for online transactions. Simple things like using a complicated password, being cautious about using your card in a secure computer environment and insuring your credit card can help reduces frauds."

Cases of fradulent activities abound. The sad part is that your only way out is to get into a loop of justice-seeking that may take years together by which time the money you have lost would lose value and you would have done the running around that’s worth much more. A small relief is that your credit score doesn’t get affected. Says Mohan Jayaraman, managing director, Experian Credit Information Co. of India Pvt. Ltd, “Any fraudulent activity doesn’t have any impact on the credit score if you have documents proving that you are fighting against the fraud." 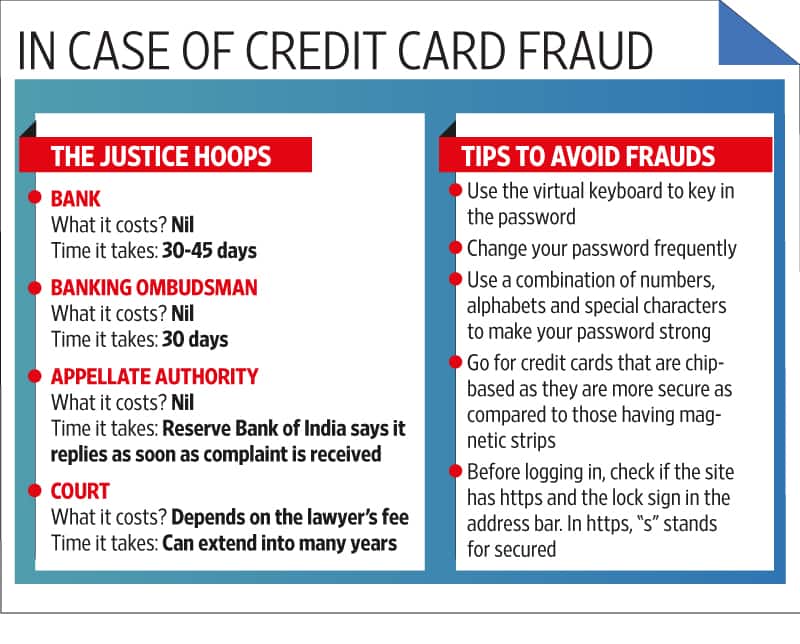 Step I: Inform the bank immediately and be firm

If you notice any kind of fraud transaction in your bank account, no matter how small the amount is, call or visit your bank as soon as you get to know about the fraudulent activity. If you are calling up the customer care, take note of the customer executive’s name and reference number. If you are submitting a physical letter, keep a copy for yourself. Similarly, keep the records if you send an email.

There are instances, when the bank refuses to take the complaint, but some banks are cooperative.

Says Sanjay Sharma managing director and CEO, IDBI Intech Ltd, a wholly-owned subsidiary of IDBI Bank Ltd, “The moment a customer reports fraudulent activity on his card, the card is hotlisted after the due diligence so that no further fraud takes place." Says Amit Sethi, chief information officer, Yes Bank Ltd, “If any kind of fraud happens the vigilance department is informed. If money transfer is involved, the account is freezed and immediately the process for tracing the money starts. In case money is transferred to another account fraudulently, the bank where the money is transfer is contacted and that account is also freezed. Same is the system if it happens at a point of sale or merchant. The bank contacts them too."

Be adamant with your bank in terms of getting back your money. Says Murali Neelakantan, partner, Khaitan & Co., a law firm, “Individuals who have gone through such a fraud should stand up and say that they are not responsible for it. In fact, it is the bank that is at risk."

Here you need to be vigilant in reading your transaction slip and credit card statements. Based on these documents, you can dispute with your bank.

If you don’t get a reply from your bank within the specified period, or the bank rejects the complaint, or if the you are not satisfied with the reply, you can go to the banking ombudsman.

For approaching a banking ombudsman, you need to first check under which jurisdiction you fall (see http://tinyurl.com/aqkhmwc). Once you know whom to contact, you can either send an email, fax or letter to the ombudsman.

Usually, the banking ombudsman gives a ruling cases within 30 days. In case of fraudulent transactions and breach of security from the bank’s side, the chances of getting justice is quite high.

If you are not satisfied with the ruling of the banking ombudsman and you have been unable to get your money bank, the next thing is to approach the appellate authority, who is RBI’s deputy governor; currently, K.C. Chakrabarty.

For this you will have to send a letter addressing Chakrabarty at RBI’s Mumbai office (see http://tinyurl.com/b8h4duo ).

You can go directly to a criminal court. All you need to do is file a first information report or FIR at a police station.

You can also file a complaint with cyber police stations. Says Pawan Duggal, a cyber law expert, “Remember the Umashankar Sivasubramaniam case. Here an adjudicating officer ruled that the bank would have to pay around 12.50 lakh as compensation. In this particular case, the bank appealed to the Cyber Appellate Tribunal."

Sivasubramaniam was a victim of phishing (online identity theft) in September 2007. He alleged that the bank didn’t take any action and hence sued the bank under the Information Technology (IT) Act. As of now, the case is under trial.

There have been cases that have been disputed and solved and where a customer has got back his dues from the bank. But then there are some cases that drag on for years together.