The impact of Rs2 lakh cap on losses from house property

Union Budget 2017 has proposed to cap the maximum loss that can be derived from a house property and set off against other sources of income. This loss could be in the nature of interest paid on a home loan being more than the rental value from the house.

This means that from the next financial year, a homeowner will only be able to set off such losses only up to Rs2 lakh from income under the head ‘income from house property’. However, if the loss is more than Rs2 lakh, it can be carried forward for 8 subsequent years for set off. 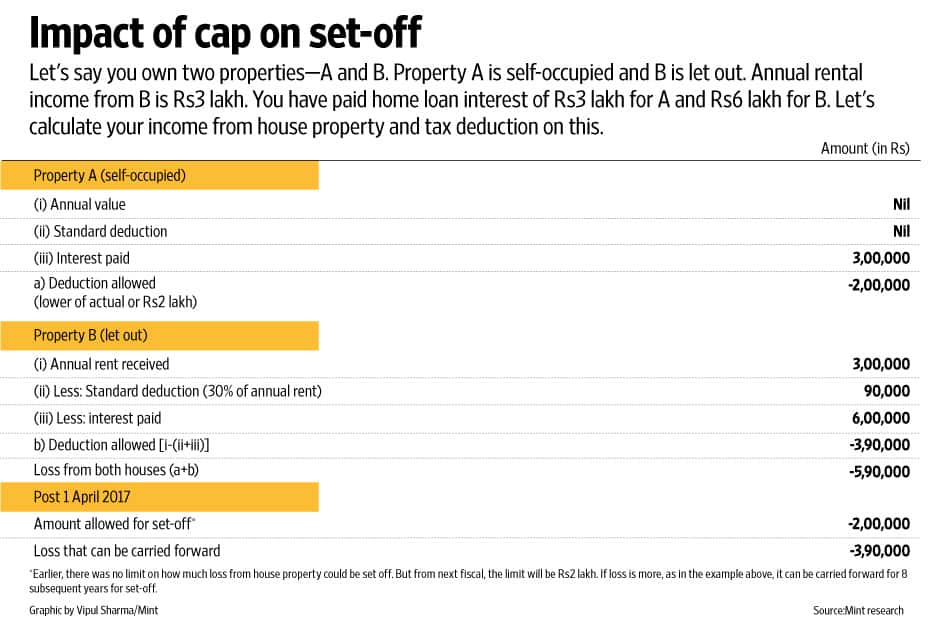 The move is set to hit many investors who may have invested in this asset to bring down their tax liability by setting off losses.

If you own only one residential property and that is self-occupied, by you or your family, the proposed amendment does not affect your tax liability. There is already a cap on the maximum deduction against the home loan interest taken for a self-occupied house: up to Rs2 lakh, under section 24(b) of the Income-tax Act, 1961.

Till now, if you had only one property, and you chose to rent it out, then you were allowed to set off the entire loss from such property against other income sources. However, from next financial year, you would only be able to set off such losses up to a maximum of Rs2 lakh.

If someone owns more than one property, then any one of those properties can be considered self-occupied. The rest are considered to be let out or deemed to be let out, if they are vacant. Till now, to calculate income from house property, one had to add the annual rent (even if house was deemed to be let out) from all the properties and deduct expenses (say, standard deduction, interest on borrowed capital and municipal taxes). If there was a loss after paying all these, which is usually the case, the entire loss could be set off against income from other sources. This drastically brought down the tax liability (see table).

For instance, if one earns Rs30 lakh from salary and loss from house property is Rs5.9 lakh, then the net taxable income would be Rs24.10 lakh. However, once the proposal to cap the losses to Rs2 lakh is implemented, the taxable income would rise to Rs28 lakh. This will increase the tax liability of the person by about Rs1.2 lakh (30.9% ofRs 3.9 lakh; which the difference between the net incomes after the set-off).