Will rash of IPOs and disinvestment affect the secondary market?

While it is possible that equity raising through IPOs for FY16 could well end up being better than last year, the overall trend for equity raising hasn't been impressive yet

Firms find it easier to sell their stories when the markets are upbeat. That’s why fiscal 2015 proved to be relatively better for equity raising activity. According to Macquarie Research, equity raising by Indian non-financial companies was nearly $10 billion in FY15, higher than in the previous three years (see chart 1). Nevertheless, as the chart shows, the amount raised in FY15 pales in comparison with the equity raising activity seen during FY07-FY08 at $44.4 billion and FY10-FY11 at $41.7 billion. 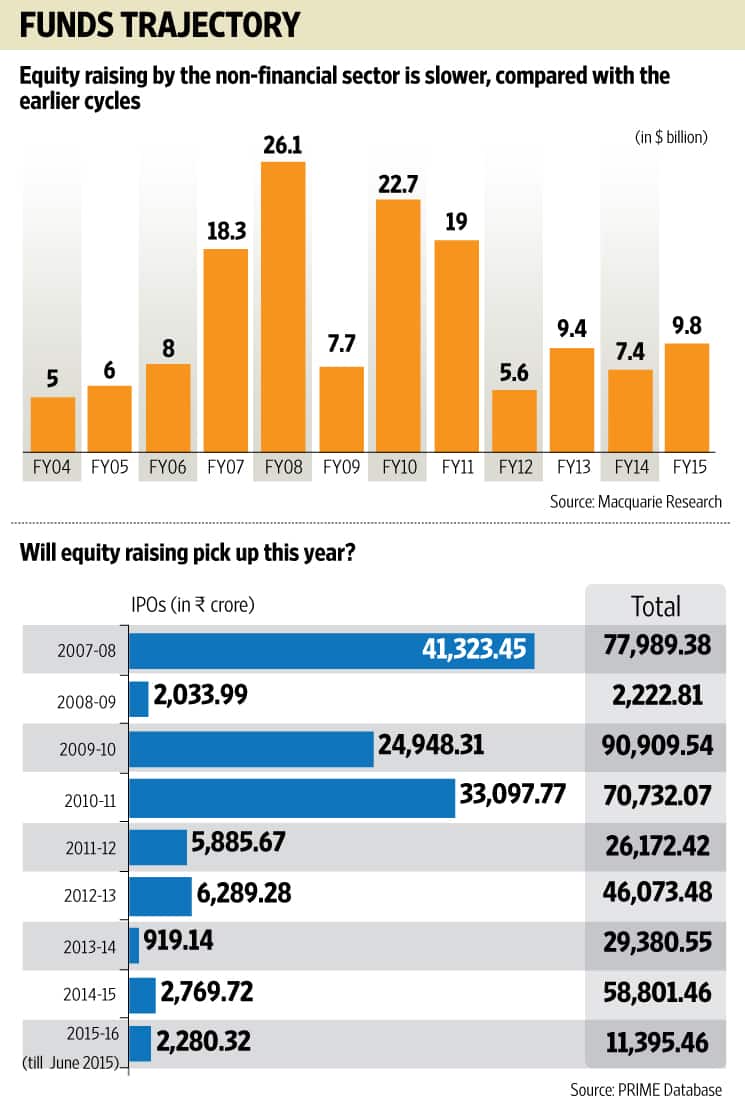 But with a slew of companies rushing to file draft share sale documents with the capital market regulator recently, how good will capital raising be this fiscal? According to data from PRIME Database, the initial share sale offerings this fiscal till June have been to the tune of ₹ 2,280 crore, slightly lower than FY15 and already much higher than FY14. But then, it’s nowhere close to what it was in FY11 (which saw the Coal India Ltd share sale) or for that matter FY08 (when Reliance Power Ltd hit the markets) (see chart 2).

There’s also a qualitative shift in the type of companies approaching the markets this time around. “In 2007 and 2010, there were many infrastructure, power and real estate companies that raised money from the markets, whereas we are now seeing companies from sectors such as consumer, banking and financial services, and healthcare coming to the market," said V. Jayasankar, senior executive director and head of equity capital markets, Kotak Investment Banking.

Currently, there are around 21 filings in the draft state. If all 21 companies decide to hit the street, the initial public offer (IPO) issuance potential is as much as $2 billion, which means that the IPO market will grow by almost 10 times, compared with last year, reckons Sanjay Bajaj, managing director and head–equity capital markets, HSBC India.

While it is quite possible that equity raising through IPOs for FY16 could well end up being better than last year, the overall trend for equity raising hasn’t been impressive yet.

So far, equity raising—including initial share sales, follow-on offers and qualified institutional placements—has been only around ₹ 11,395 crore, much lower than the ₹ 58,801 crore seen in FY15 and also lower than the ₹ 29,380 crore in FY14, according to PRIME Database (see chart 2).

According to CLSA, the fact that the Employees Provident Fund Organisation (EPFO) will start to invest in the equity markets could mean a total investment of nearly $2.5 billion in a fiscal. “The move could help the government’s divestment agenda ($11 billion in FY16) as EPFO would now be able to buy shares in government-owned companies," said CLSA in a report on 26 June.

More primary market activity is unlikely to perturb the secondary markets much. As Sanjeev Jha, head of capital markets, Bank of America Merrill Lynch, said, he would not worry about India primary market issuance volume affecting the secondary markets in any significant manner. “The estimated capital raising for CY2015 still seems to be around the long-term averages of about $20-25 billion. We think the markets will absorb that kind of supply. We haven’t seen a very sharp spike in primary issuance activity like in China which could pressure secondaries," said Jha.