Amid loan waivers, foreign investors want nothing to do with state bonds

Over the last few months, foreign investors are avoiding state bonds even though their pockets are filled to brim with central govt bonds and private corporate bonds

Indian states have never been able to attract dollars to finance their market borrowings. Since October 2015 when state development loans (SDL) were first allowed to be picked by foreign portfolio investors, not more than a trickle has come in.

But over the last few months, foreign investors are earnestly avoiding state bonds even though their pockets are filled to brim with central government bonds and even private corporate bonds.

Consider this. Since April, foreign investors have bought only Rs140 crore worth of state bonds while they grabbed nearly Rs40,000 crore of central government securities. The total approved investment limit in state bonds for investors was hiked by Rs6,000 crore in April this year and that of government bonds was hiked by Rs11,000 crore. Foreign investors even willingly bought more than Rs35,000 crore worth of corporate bonds at a time when companies are fixing their over-leveraged balance sheets. 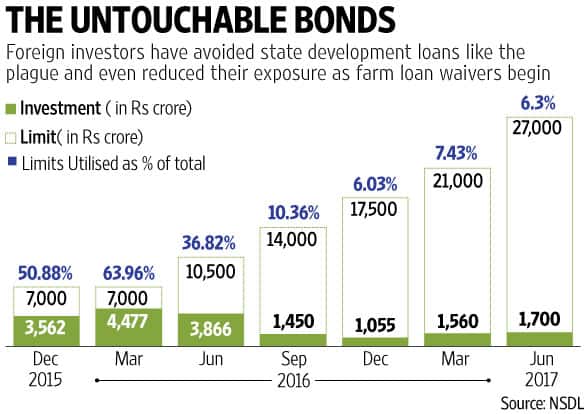 As of 19 June, foreign portfolio investors have used up more than 90% of their investment limit in central government bonds but the usage of the state bond limit is only 7.4%. That of corporate bonds is over 80%.

Why are state bonds being treated like the plague?

For one, state bonds are bereft of active trading and therefore, there is poor price discovery. Trading picks up on the day of a state bond auction only to die down immediately. Bidding at state bond auctions is not scientific either, as investors quote a spread over the prevailing government bond depending on how the liquidity position is. Although no two states are similar in their financial position, sometimes the yield on bonds of states with weaker finances and those of better ones is the same.

Adding insult to injury is the latest slew of farm loan waivers by a bunch of states. State fiscal deficits are expected to surge and already stretched balance sheets of some states could begin tearing at the seams after these waivers. This is reason enough to avoid state development loans.