Thanks for Visiting Mint
You seem to have an Ad Blocker on. Please turn it off in order to continue, or whitelist Mint
HOW TO TURN OFF AD BLOCKER
OR
REFRESH IF YOU ALREADY TURNED OFF THE AD BLOCKER
Home >Market >Mark-to-market >Hindalco’s pitch queered by falling aluminium prices

Hindalco Industries Ltd’s profitability took a hit in the March quarter, compared with the December quarter. Though its aluminium output rose smartly as its new capacity ramped up, falling prices and weaker metal premiums affected realizations. The copper business did relatively better but its profitability, too, declined. Aluminium production rose by 11.5% while that of copper rose 5.3%.

In the March quarter, Hindalco’s stand-alone revenue rose by 8.9% to ₹ 9,371.6 crore, over the preceding quarter, with aluminium leading the way with a 13.9% increase. But the aluminium division’s segment profit fell by a massive 20.3%, and copper segment’s profit fell by 1.6%. Lower realizations hurt aluminium margins, while copper suffered due to adverse market conditions, according to a company release which did not elaborate further. Vedanta Ltd had said that its treatment and refining charges, the main revenue for the copper smelting business, was flat over the preceding quarter.

Since both divisions saw profits decline, Hindalco’s operating profit fell by 8.2%, with margin slipping by 1.7 percentage points. Lower profitability, when depreciation and interest costs have increased, caused a 20.8% decline in its profit before tax and before one-time items. 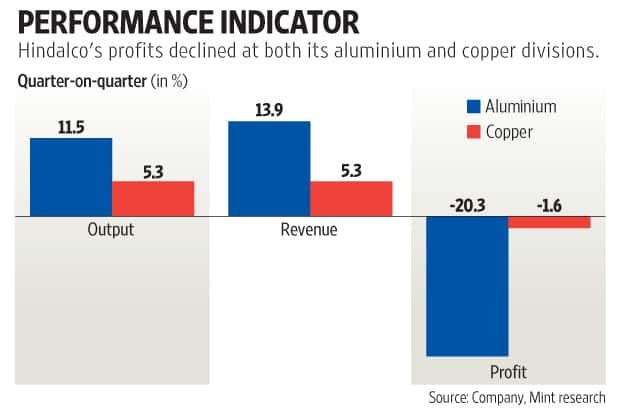 Aluminium prices remain under pressure and were volatile too; the spot price has fallen by 2.6% since 1 April but is 11.7% down from its highs. Surplus metal at a time of slower demand growth has put the pressure on prices. It’s a cloudy outlook for the aluminium business. If there is an improvement in raw material and coal availability, that could lower its input and fuel costs, and provide some relief from falling prices. Another positive could be if the copper business’ profitability revives; Vedanta did sound positive about the outlook for its copper business in FY16.

For the moment, weak aluminium prices will cast a shadow over the Hindalco stock, which fell 1.6% on Thursday and has declined by 13.7% in the past three months.