Mumbai: Net investments by domestic institutional investors (DIIs) in Indian equities in the three months ended June was the highest on record for any quarter, helping counter a slowdown in foreign fund inflows into a market that has been characterized by volatility since the start of the year.

After hitting a lifetime high of 30,024.74 points on 4 March, the benchmark BSE Sensex slumped 12.4% to a 2015 low of 26,307.07 on 12 June as markets fretted about poor prospects for corporate earnings, a tax row between foreign institutional investors (FIIs) and the government and forecasts of a sub-par monsoon.

Worries over a possible Greek exit from the European monetary union and the likelihood of the US Federal Reserve raising interest rates kept investor sentiment gloomy.

In the June quarter, the 30-share Sensex added a mere 0.63%—its worst performance since March 2013—as FII inflows slowed. Overseas funds were net buyers of Indian equities to the tune of $184.34 million in the quarter—the lowest they invested since the quarter ended September 2013.

Separately, data from the Securities and Exchange Board of India (Sebi) showed that mutual funds injected a net of ₹ 11,795.3 crore into Indian equities in the June quarter, less than what they invested in the quarters ended September and December. Data for the last day of June was not available.

State-run Life Insurance Corporation of India (LIC), the biggest domestic investor and the country’s largest life insurer, has been actively buying Indian shares in the last two quarters, according to a person familiar with LIC’s investments who requested anonymity. An email sent to LIC remained unanswered.

Insurance companies that have launched new products are seeing good inflows into their schemes, said Nirakar Pradhan, chief investment officer (CIO) at Future Generali India Life Insurance Co. Ltd. “So, with every dip, they are lapping up investments at attractive prices," said Pradhan.

“This is only the beginning of a bull market. It is all about how one chooses to look at a glass half-filled with water. The investment environment may not be at its best, but it is far better than what it was before," added Pradhan. 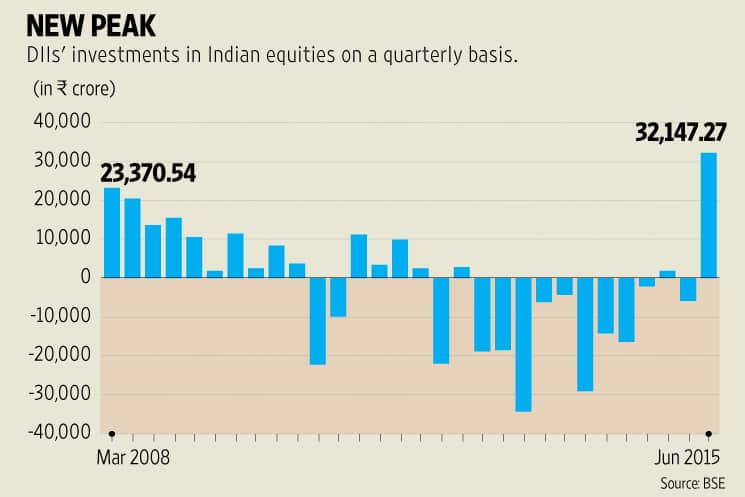 According to Sampath Reddy, CIO, Bajaj Allianz Life Insurance Co. Ltd, insurance companies are not experiencing heavy inflows, but outflows have come to a stop.

For the mutual fund industry, assets under management (AUM) in the June quarter reached ₹ 12.34 trillion, according to the Association of Mutual Funds in India.

“In our case, this has been the strongest quarter in terms of inflows. We expect industry flows to be very strong over the next 2-3 years," said Nandkumar Surti, managing director and chief executive officer at JP Morgan Asset Management India Pvt. Ltd.

High inflation and negative real interest rates over the last few years pushed investors towards physical assets, according to Surti. With the Reserve Bank of India and the government coming to grips with such factors, individual investors are turning to financial assets, including equity mutual funds.

“The moot point is of the total $6 trillion of household wealth, only 2.2% is in equities at this point. The penetration of retail investors is very low. Even if it were to rise by 1 percentage point to 3.2%, it will amount to an addition of $60 billion in equities," Surti added.

In a note on 5 June, Crisil Research said investors continued to pump money into equity funds despite volatility in the asset class in recent months, adding that the category had logged inflows for the 13th consecutive month in May, with ₹ 10,076 crore flowing in.

Equity funds’ AUM rose 5.8% to a record high of ₹ 3.65 trillion in May, buoyed by higher inflows and mark-to-market gains, the note added.

According to Ritesh Jain, CIO at Tata Asset Management Ltd, inflows were more or less consistent on a daily basis, and there had been substantial growth in systematic investment plans.

“Earlier, we didn’t see much of an interest on dips. Even though the market was volatile last quarter, investors continued to add to their equity holdings," Jain said.