Thanks for Visiting Mint
You seem to have an Ad Blocker on. Please turn it off in order to continue, or whitelist Mint
HOW TO TURN OFF AD BLOCKER
OR
REFRESH IF YOU ALREADY TURNED OFF THE AD BLOCKER
Home >Market >Mark-to-market >Easing price of titanium dioxide a near-term relief for paint companies

After touching a multi-year high in June, titanium dioxide prices have begun to gradually ease and are currently down nearly 12% from their peak

A key concern for paint companies and market participants having exposure to these stocks has been escalating input costs. The price of titanium dioxide (TiO2), one of the key raw materials required to manufacture paints, has been rising since the start of 2017.

In the wake of surging raw material costs, paint firms resorted to consecutive price hikes, aggregating to 5.5% in March and May this year. However, they failed to protect their margins as volumes took a knock while transiting to the goods and services tax (GST) in the June quarter. Both Asian Paints Ltd and Berger Paints India Ltd saw decorative paints volume slipping to single digits, with the former taking a harder hit.

After touching a multi-year high in June, TiO2 prices have begun to gradually ease. Most Indian paint firms import TiO2 from other countries including China. Currently, prices are down nearly 12% from their peak (see chart). 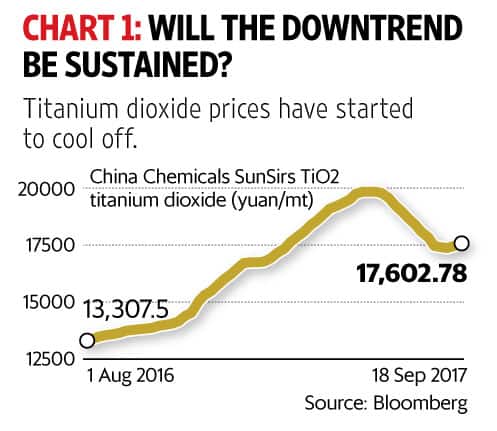 Since prices of other raw material prices have also remained largely stable post the June quarter, margins may see improvement on a sequential basis. Further, the price hikes taken earlier will fully yield results from this quarter. Both these factors are likely to provide near-term relief to paint makers on the margins front.

“Despite price hikes, gross margins of leading paint companies compressed by around 400 basis points (bps) in the June quarter. Currently, TiO2 prices have corrected by nearly 15%, sequentially. So a quarter-on-quarter margin growth of maximum 100-150 bps can be anticipated, and that could reflect with some lag," said Sachin Bobade, an analyst with Dolat Capital Market Pvt. Ltd. One basis point is one-hundredth of a percentage point. Though TiO2 prices have softened, they still remain high on a year-on-year basis. So, margins of paint companies are unlikely to touch the peaks seen last year.

Also, there is no clarity on what the exact impact of GST has been like for paint companies.

“Usually, when raw material prices ease, paint companies tend to pass on the benefit to consumers. But this time around, given the disruption caused by GST and the complex distribution structure, companies are unlikely to take a cut, at least not in the near term. For them to be able to reduce prices, TiO2 prices have to remain at the current level or ease further at least for two more quarters. However, sequentially, gross margins could improve by 50-100 bps," Sameer Deshmukh, an analyst at Reliance Securities Ltd, said.

As far as volumes are concerned, a recent channel check conducted by ICICI Securities Ltd showed that decorative paints volume growth, which was hit by GST-led destocking, has seen a healthy recovery in July and August. Volumes would improve from the lows seen in the June quarter if September sales, too, fare well. “Some recovery is expected in Q2 now that re-stocking is likely to have happened and early festive season would also aid, but for volumes to bounce back to double digits it will take another quarter," Deshmukh added.

Meanwhile, on a year-to-date basis, stocks of top paint companies have outperformed key benchmark indices and continue to trade at rich valuations.