Who’s afraid of Grexit? Not the Indian markets

Such an eventuality has already been discounted by equity and bond markets as Greece's share of European economic output is only 1.5%, its debt is mostly held by govts, the IMF and ECB

Greece’s resounding “no" to the austerity measures suggested by its creditors roiled international markets. That was predictable, but there was no panic reaction. In Asia, the Sensex pared its losses to end the day up; Chinese stocks rose after the government rushed in to shore them up, while Japan and Hong Kong slipped. European stocks, too, opened down, but mostly in the 1-2% range and some of them started inching up at the time of writing. 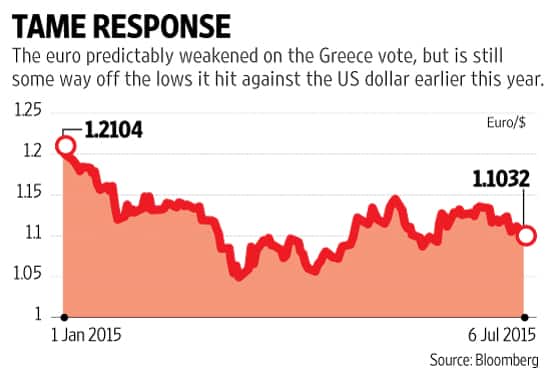 The reactions are muted for reasons well known. Partly, such an eventuality has already been discounted by the equity and bond markets. Greece’s share of European economic output is around a mere 1.5%. Greek debt is mostly held by governments, the International Monetary Fund and the European Central Bank (ECB).

The main risk seems to be political rather than financial as other anti-austerity, Left-wing parties in countries such as Spain and France welcomed the vote.

For now, bondholders do not seem to fear any kind of contagion, not least because ECB and other policymakers have an arsenal to combat any such event. The bond yields of peripheral nations such as Italy, Spain and Portugal edged up close to their year-to-date highs, but are nowhere close to the peaks of 2012. As a result, the flight to safe-haven assets is also muted.

At the time of writing, gold prices were lower than Friday’s close. The dollar index has inched up to 96.23, but is still far away from its peak of 99.7 in mid-April. Similarly, German and French 10-year bonds, too, saw their yields fall, but not by much. The euro has predictably weakened, but is still some way off the lows it hit against the US dollar earlier this year.

The fallout of the Greek “no" vote will play out over some time.

It is not known whether this will pave the way for Greece’s exit from the euro or if there is some hope for a package to be put together.

In the meantime, the markets will continue to be on tenterhooks even if there is no panic or contagion risk. If the market turmoil continues, there is a good chance that the US Fed’s planned rate hike might be postponed. Secondly, lower commodity prices (though that is more on account of the problems in China) and crude oil prices will support a nascent recovery in the Indian economy. That spells good news for Indian stocks, but the monsoon and June quarter corporate earnings will remain key triggers in the short term.