India offers rupee-dollar market on a platter to Dubai, Singapore

In the exchange-traded space, there are obvious reasons why overseas traders and even some domestic traders prefer offshore markets

Last week, soon after June futures contracts expired, trading activity on the Dubai Gold and Commodities Exchange (DGCX) witnessed an unusual surge. By 1 July, the open interest in its dollar-rupee futures contracts had reached $3.8 billion, far higher than the outstanding positions worth $1.6 billion on the National Stock Exchange (NSE), the erstwhile leader. Along with the Singapore Exchange (SGX) and the Chicago Mercantile Exchange, the share of overseas exchanges in the dollar-rupee futures market now stands at 65.7%.

Only about a third of all exchange-based trading in this market happens onshore. This is worse than the over-the-counter (OTC) forex derivatives market, where a Bank for International Settlements’ (BIS) triennial survey of central bank revealed that only 41% of trading, in turnover terms, happens onshore. In that market, Singapore and London together enjoy a 41% share. The US and Hong Kong are other sizeable markets for non-deliverable forwards.

In the previous such survey, the onshore market had a 50% share. Evidently, an ever increasing proportion of dollar-rupee trading is happening in offshore markets. With India persisting with some of its restrictions for currency trading, the gap can only be expected to widen.

In the exchange-traded space, there are obvious reasons why overseas traders and even some domestic traders prefer offshore markets. First, traders are allowed a so-called free trading limit of only $15 million by Indian regulators. For a higher trading limit, traders need to demonstrate underlying exposure which they need to hedge. This is cumbersome and firms prefer using the OTC market in such cases. SGX allows a maximum position limit of 2,000 crore (roughly $300 million), and in the case of DGCX, there are no position limits. 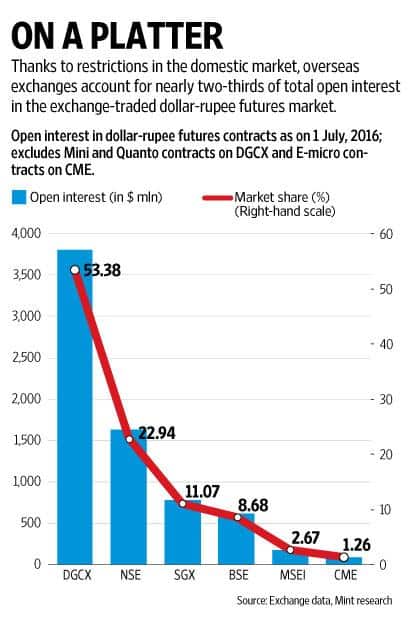 India’s position limits are paltry, not only vis-a-vis offshore counterparts, but also compared to where they were before RBI clamped down on limits three years ago. Before the clampdown, traders could take a position of as high as $300 million on the NSE. Note that trading activity on the DGCX picked up after the clampdown in India; besides the increased restrictions in Indian markets encouraged others such as SGX to launch their own dollar-rupee contracts.

Secondly, while Indian exchanges trade currency derivatives for eight hours each day, SGX and DGCX are open for 18 and 16.5 hours, respectively. Indian markets are shut well before London markets close, as well as before the US markets open for trading. It’s hardly surprising that traders choose offshore destinations, given the flexibility they provide.

Earlier this year, there was a glimmer of hope when the Reserve Bank of India (RBI) and Securities and Exchange Board of India (Sebi) announced that exchanges can introduce cross-currency pairs such as the euro-dollar and also extend trading hours on these new contracts to 7.30 pm (versus 5 pm for all other contracts). But the regulators have been in a quandary since. They are still trying to figure out how they can prevent traders from using cross-currency pairs to create synthetic rupee positions that exceed prescribed limits. See bit.ly/29HLBTD for a discussion on this. The bottomline, however, is that even the planned baby steps to reforms haven’t yet seen the light of day.

Note that India’s commodities markets are already open till 11.30 pm. For over 10 years now, they have handled settlements without any trouble. As pointed earlier in this column, with Sebi now regulating commodity exchanges, it looks strange that it is comfortable with allowing one of the segments it regulates to trade till 11.30 pm, but is unsure about allowing the same benefit to users of another segment.

Another quirk in Indian regulations is that when traders exhaust their $15 million limit on one exchange, they can create an additional $15 million position on another exchange. Across the three currency derivatives exchanges that operate in the country, traders can thus have a free trading limit of $45 million. There’s no compelling reason why regulators have to forcibly distribute trading activity across exchanges. It’s likely that an exchange such as Metropolitan Stock Exchange may lose market share as a result, but using such a prop is hardly justifiable from a regulator’s perspective. After all, there is no such forced distribution of orders to stock exchanges.

Finally, while the central bank is known to be reticent about reforms, the fallout of the export of the rupee market is that its influence on the dollar-rupee rate would decrease, as any intervention in the onshore market will be less effective. Of course, like some other central banks, it can choose to intervene in large offshore markets such as London and Singapore. Whether it has developed the operational capability to do so is another matter altogether.

Meanwhile, India is also working on setting up an international financial service centres, which will supposedly compete with markets such as Dubai and Singapore. But when India’s main markets are losing out because of policy lapses, one wonders whether these new proposed markets will hold any hope.

We welcome your comments at inthemoney@livemint.com.