The overall buoyancy in sales at Amara Raja led to a 17% y-o-y jump in net revenue. With facilities being fully utilized, operating margin was rock steady amid rising costs

Shares of Amara Raja Batteries Ltd (ARBL), the No. 2 lead-acid battery manufacturer in the country, trade at 22 times FY18 earnings. This is at a significant premium to market leader Exide Industries Ltd’s (EIL’s) valuation of 17 times. And ARBL’s power-packed September quarter performance supports its rich valuation, too.

For, on the back of a steady increase in automobile sales, the company has improved its penetration in the original equipment segment. But, importantly, it reported a double-digit growth in the replacement market, which means that it has gained market share, too.

Although the unorganized battery market makes it hard to measure market share accurately, analysts say that the firm has steadily gained share from 23-24% to about 35% over the past few quarters.

This is not all. Tough times notwithstanding, the company reported a decent improvement in industrial battery sales, too, during the September quarter. However, it had some dull spots. The uninterrupted power supply segment saw weak sales even as competition is on the rise in the telecom battery segment, both of which are strongholds of ARBL. 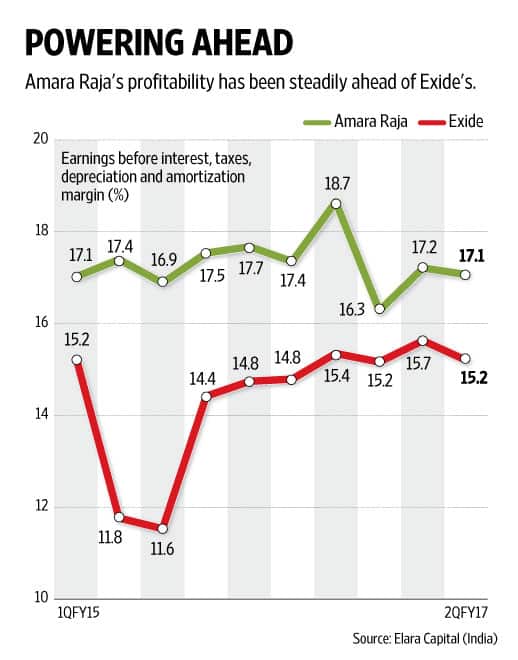 That said, the overall buoyancy in sales led to a 17% year-on-year (y-o-y) jump in the quarter’s net revenue. With facilities being fully utilized, ARBL’s operating margin was rock steady amid rising costs.

In the past one year, the price of lead has moved up from around Rs116 per kg to Rs139 a kg. But ARBL’s overall operating margin is stable at around 17.1 % for nearly 10 quarters, even through periods when auto sales, which comprise more than half the revenue, were subdued.

Its competitor EIL’s operating margin that dipped a couple of years ago has now limped back to about 15.2%.

A report by Elara Securities (India) Pvt. Ltd says that the superior margin profile and return rations of ARBL, when compared with EIL, will continue to sustain higher valuation. Dealers also say that ARBL’s products are a tad cheaper in the replacement market than EIL’s, which leaves scope for improving profitability through price increases in the replacement market.

ARBL continues to ride on its ability to make inroads into new geographic regions and new industrial segments. Meanwhile, there are high expectations that the implementation of the goods and services tax, or GST, will see the unorganized battery market shrink as the price gaps reduces in comparison with the organized segment.

However, EIL’s shares did zoom past ARBL’s a few quarters ago when it made a comeback in sales and profit margin, which had gone downhill for a long time. Whether the demonetisation will impact battery sales though remains a key risk.