Reliance Jio's onslaught led to a 10% decline in the revenues of large firms such as Bharti Airtel, while in the case of smaller ones, the decline was as high as 22-24%

When elephants fight, it is the grass that suffers. Reliance Jio Infocomm Ltd may have trained its guns on large telcos with its unlimited usage plans, but it turns out that small telcos have been hurt much more. A loss of 50-100 basis points in market share may not seem like a big hit at first, although it counts for a lot when we consider that these companies have a market share of only between 4% and 6%.

And while Jio’s onslaught led to a 10% decline in the revenues of large companies such as Bharti Airtel Ltd, in the case of smaller companies, the decline was as high as 22-24%. This is the drop in gross revenues reported by telcos to Telecom Regulatory Authority of India (TRAI) between the September 2016 quarter and the March 2017 quarter.

Some of these companies were already running high losses due to poor economies of scale. Now, with nearly a fourth of revenues having disappeared, and barely any respite on the costs front, losses and cash burn will be far worse. It’s hardly surprising that Reliance Communications has had to plead with banks to postpone its debt servicing payments till December; the move, in turn, led some credit rating agencies to downgrade RCom debt to default levels.

The second chart shows how the drop in the active subscriber base of small telcos has been far higher as well. In contrast, large telcos such as Airtel and Vodafone have reported an increase in their subscriber base since Jio’s launch in September 2016. 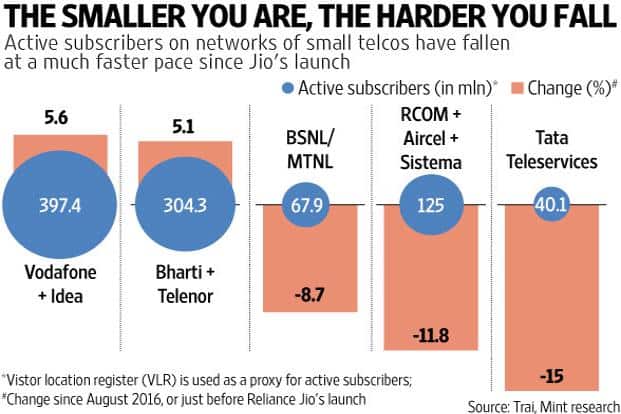 But why are small telcos, with their sub-par subscriber base, struggling at a time when Jio’s services are seemingly aimed at the premium segment? After all, Jio’s services can largely be used by those with relatively expensive 4G-enabled smartphones, most of who were customers of the large incumbents. Besides, its tariff plans encouraged high use of data services, and should have hardly appealed to low-end users of small telcos.

While Jio started off targeting high usage and therefore, high Arpu (average revenue per user) customers, it has since climbed down considerably on its Arpu expectations. In September, when it launched services, Jio’s flagship plan entailed a monthly spend of around Rs330. Now, the same plan costs only around Rs110 per month. And since its large competitors have tried to keep pace, tariffs have fallen across the board, and apply even to those who can afford only inexpensive feature phones.

Also read: Telenor’s painful exit and the writing on the wall

Earlier, small telcos survived by pricing their services at a discount to tariffs levied by large telcos, and their subscriber base consisted of a large number of customers who were discount shopping. But now with all the large companies themselves pricing voice services at much lower levels, the business case for small telcos has more or less disappeared.

Besides, while large companies are investing billions of dollars to upgrade networks and attract/retain customers, small telcos have stopped investing because of high leverage.

Telenor ASA saw the writing on the wall earlier this year, when it handed over its business worth Rs5,000 crore on a platter to Bharti Airtel Ltd.

Leave alone receiving any value for its equity, Telenor also said it will service the outstanding debt of its Indian subsidiary before the handover. The remaining small telcos, too, would do well to cut losses and exit, while their assets still have some value.