Finally, the impact of demonetisation is visible in the gross domestic product (GDP) numbers. Gross value-added (GVA) growth at constant prices fell to a mere 5.6% in the fourth quarter of fiscal year 2017 (FY17), clearly showing the scars of demonetisation on the economy.

That’s not all. The headline growth number conceals more than it reveals. If we leave out the “public administration, defence and other services" component of GVA, comprising mainly government expenditure, then growth slumps to an even lower 4.1% in the fourth quarter. Clearly, the impact of the pay hike to government personnel has bailed out the economy. And if we leave out “public administration, defence and other services" as well as agriculture, on the grounds that agricultural growth is chiefly due to the rain gods’ generosity, then growth in the rest of the economy at constant prices plummets to a piffling 3.8% for the fourth quarter. 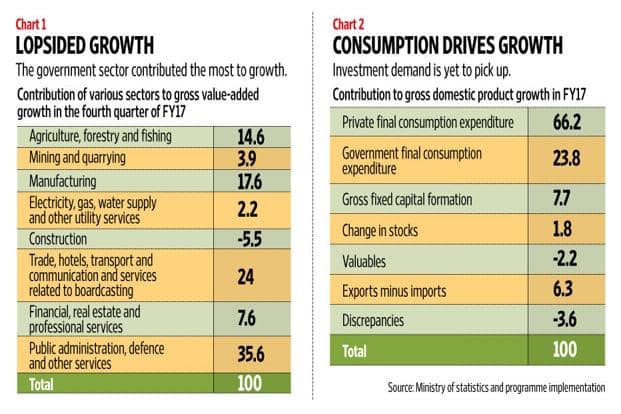 Indeed, if we do a similar exercise for the fourth quarter of the previous year, or FY16, leaving out government spending and agriculture, we find that GVA growth at constant prices in the rest of the economy at that time was 10.7%. The full impact of demonetisation may therefore be gauged in the fall of growth in this part of the economy from 10.7% to 3.8%.

Chart 1 shows which sectors contributed how much to GVA growth during the fourth quarter of FY17. Notice the contribution of “public administration, defence and other services" was more than a third. The data on government final consumption expenditure (GFCE) from the expenditure-side numbers also shows that GFCE increased by as much as 31.9% in the fourth quarter of FY17, compared to the year-ago quarter.

The terrible state of the banks is reflected in the poor contribution of the “financial, real estate and professional services" component of GVA.

What was it that drove GDP growth in FY17? Chart 2 has the details. As is rather obvious, consumption powered growth during the year, with private consumption contributing two-thirds. Government consumption expenditure was a strong contributor. For the fourth quarter, gross fixed capital formation was lower than a year ago, indicating the lack of investment demand.

What are the implications of these numbers? The very low growth in the fourth quarter indicates that the slowdown is likely to persist in the current quarter as well. The equity markets, sorely in need of a reality check, could use these numbers to book some profits. Gaurav Kapur, chief economist at IndusInd Bank Ltd, points out that the bond markets will derive some cheer, particularly as the Reserve Bank of India may well be forced to rethink its hawkish posture in the light of slower growth. The prospect of near-term disruption because of the adoption of the goods and services tax will also weigh on growth.