Home >Money >Calculators >How to save money if studying abroad

How to save money if studying abroad

Small steps can lead to big savingschoosing accommodation, using student cards to get discounts, and more

It is that time of the year when students pursuing higher education overseas are getting ready to leave. The long-drawn process of admissions is now over, and it is time to start packing bags. Staying abroad can be difficult in more ways than one, and expenses can be a constant worry if not planned for. The most popular countries that Indian students go to—the US, the UK, Australia, Canada and Singapore—are also the most expensive.

According to the 50 Best Student Cities 2015 survey by higher education data experts, QS, London was the most expensive city. The annual survey is based on parameters such as student mix, desirability, employer activity and affordability. Incidentally, many Australian, American and Canadian cities were also among the bottom 30 in the list. Most affordable cities were Mexico City (Mexico), Taipei (Taiwan), Berlin (Germany), Vienna (Austria) and Munich (Germany).

Apart from the cost of studies, one has to take care of the living expenses as well. This includes rent, food, travel, utilities and so on. Managing these can be a daunting task. However, there are many ways in which students can curtail at least some of their expenses. Mint takes a look at how you can make the most of your time abroad without burning a hole in your wallet.

What is the living cost?

Draw up a list of what all you need and find out their cost. This will help you structure a budget for yourself—which you should try and stick to once you are there. 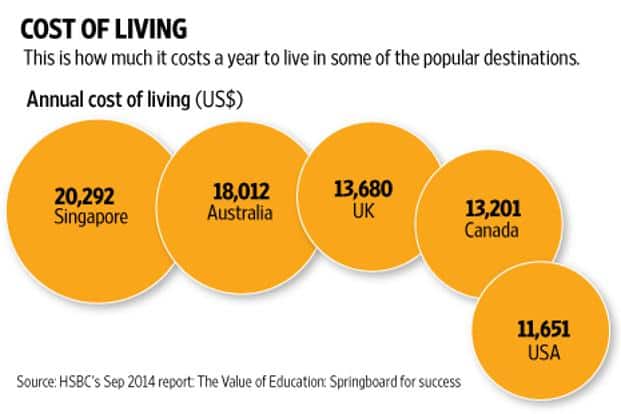 Cutting back on rent

After tuition, accommodation is the biggest expense. You can choose to live either on-campus or off it.

Akriti Mehta, a Bengaluru-based consultant, did her Masters in Business Administration from the Asian Institute of Management in the Philippines. She stayed in an on-campus dorm. “It made more sense to do so as we had very tight schedules. Classes would start really early in the morning, and at nights, we would have study groups, which went on till rather late. So, commuting would have been difficult had I stayed far away from campus," said Mehta.

However, in some cases, staying on campus can turn out to be more expensive. According to GoStudyUK.com, a website that provides information to international students, a self-catering hall (on-campus accommodation where you make your own food in a shared kitchen) will cost £180-360 a month, a catered hall (where food in provided) will cost £320-400, and a private house, £200-380.

“The ideal way is to share accommodation and reduce costs. However, ensure that the cost of some of the utilities is added in the apartment rent itself," said K.P. Singh, chief executive officer of Institute of Management & Foreign Studies and Global Consultants, a coaching centre for competitive examinations for foreign institutes.

Sagar Bhadra, a 27-year-old who lives in New York and works with a private equity firm, had studied at the University of Texas, Austin, in the US. He stayed at the college dorm during the first year and then moved off campus by renting an apartment with a few friends. “Four of us rented an apartment, which turned out to be significantly more comfortable and cheaper than the school dorm. This also helped us save on food expenses as we could just cook our own food instead of having to eat expensive cafeteria food," said Bhadra.

If you, too, decide to live off-campus, staying near the city centre might be costlier. Try and look for accommodation in a suburb that is not too far away from campus.

In many countries, there are special offers for students. Make use of these. Here are a few examples.

Special offers: Your student identity (ID) card can be used for off-campus purposes as well, mostly to get discounts. “Once enrolled, you get a student ID card, which can fetch you many discounts. You can use it at apparel shops, restaurants, museums and many other places," said Sudha Mary Toppo, regional head, South Asia, Sheffield Hallam University, UK.

For instance, the Sydney Opera House gives full-time students the opportunity to purchase tickets called ‘Student Rush’ at a special rate. The Guggenheim Museum in Bilbao, Spain, gives its annual membership to students below the age of 25 at a discount of €20. Publications such as The Economist, The Wall Street Journal and The New York Times all cut a certain percentage off if you are a student subscriber.

There are even international student ID cards that can get you discounts.

The International Student Identity Card (ISIC) is an example. “With an ISIC card you can get discounts across segments such as travel, museums, theatre, shopping and others. You can even use it as a valid ID card till you get one from your university," said Richa Goyal Sikri, director-group business development, STIC Travel Group, which markets and distributes ISIC cards in India.

Then there are cards that are country specific.

For instance, the US has the Student Advantage card, which allows students discounts on food and clothes, and offers on dental plans, spectacles, gadgets, car rentals, the Greyhound Lines (national bus service) and many other services.

Those studying in the UK can get themselves a card from the National Union of Students (NUS), which offers discounts on travel insurance, mobile phone plans, storage space, driving lessons, and shopping on portals such an Amazon.co.uk and many more.

Flying cheap: Many airlines offer seasonal deals for students, allowing them to carry extra luggage at no extra cost, and sometimes discounted fares.

For instance, if you are flying out of India to the US or the UK on Virgin Atlantic (economy class), you are entitled to carry three bags of 23 kg each (total of 69 kg) and 10 kg as hand-baggage. You are even allowed one date change for free. Emirates Airlines, too, is allowing student travellers to carry 10 kg extra baggage (offer is on till the end of the year). To avail of such offers, all you need to do is submit your student visa and student ID.

Check airline websites to see if they have such offers for students.

Travelling and discovering new places are perks of studying abroad. And this, too, can be done without dampening the fun.

Many countries have special railway passes for students. For instance, Eurorail passes are much cheaper if you are below the age of 25. France has its 18-27 Railcards where, if you are below 27, you can get discounts of up to 60% on certain trains.

When the word “budget" is prefixed to anything, it can be a good deal. In her 16 months in the Philippines, Mehta twice went on a holiday to smaller islands nearby. “We stayed mainly in budget hotels. And since many of us would go together, this meant that bill would be split."

Budget airlines, too, are an economical mode of transport.

Ragini Srikrishna, 20, is doing her under-graduation course in psychology from the University of Illinois at Urbana–Champaign, in the US. She is in her third year, and has secured the job of a resident assistant in her university. “For the first two years, I used to pay to stay in the resident hall. Now that I have become am resident assistant, not only is my stay free, so are my meals. This will lead to big savings for me," says Srikrishna.

On-campus jobs include internships, assistantships and even jobs at the university library or cafeteria. There are off-campus options too. But as an international student, you should find out if you need a permit to work off-campus, and which jobs are allowed.

“Doing a part-time job can supplement your expenses. However, you should make sure that it does not jeopardize your studies. Also, ensure that you have all the approvals in place," said Toppo.

Check with the international student office in your university about the kind of jobs you can do.

As is with any big-ticket expense, planning in advance can be helpful. Same goes for studying abroad.

Try to calculate the living cost in advance so that you are not in for any rude shocks. Seek advice from the institute you are going to, or from students who have studied in that city. Various student advice and information websites will also provide living cost estimates. Check out a few and draw up your own list. Keep a little extra in case your calculations fall short.

Studying abroad can be expensive but fortunately, not every experience has to break the bank.

If you manage your money wisely, you can enjoy your student life to the maximum. So, make the most of it because after this, such freebies will be few and far between. 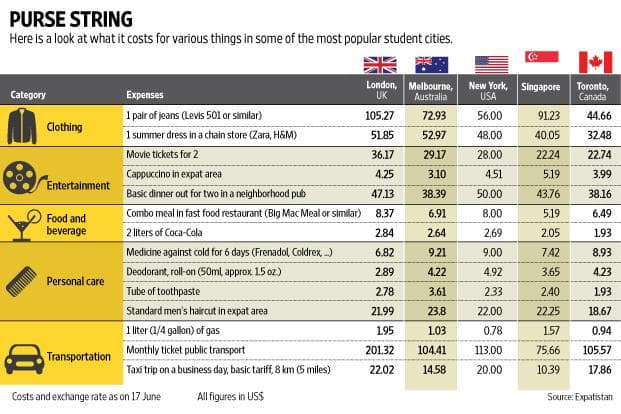