The rupee was the worst performer against the dollar among all Asian currencies with a 1.737% decline

Mumbai: The Indian rupee plummeted past the 60 to the dollar mark on Wednesday for the first time, ending at 60.73 as the Reserve Bank of India (RBI) stopped supporting the domestic currency once it slid past 60.

The slide is in line with the recent withdrawals from emerging markets but experts said Wednesday’s fall may have more to do with a raid by speculators on the rupee, seeking to take advantage of moves by the central bank to prevent it from sliding past 60 to the dollar amid thin volumes. RBI has sold more than $60 billion since 2008 to check the rupee’s fall against the dollar.

Some see the rupee going to 62 versus the dollar before stabilizing.

Dealers said RBI tried to stop the slide at 59.98 levels in afternoon trade by selling dollars, leading to a recovery to 59.93, but that was just a temporary reprieve. Within half an hour of RBI’s intervention, the domestic currency breached the 60 level and the central bank exited the market, dealers said. In a span of just 15 minutes in the afternoon, the rupee moved 75 paise, the highest ever movement in such a short span, said currency dealers. The slide of the rupee past the 60 mark triggered stop losses and short covering, which meant the currency plunged by more than ₹ 1 in intra-day trading.

“This panic could continue for another couple of sessions until RBI takes some meaningful action to control the rupee slide," said Kishore Narne, head of commodity and currency at Motilal Oswal Commodity Broker Pvt. Ltd.

Interestingly, the rupee seemed to be an outlier among other Asian currencies, which didn’t weaken by as much.

The worst performer on Wednesday among all Asian currencies, the rupee fell 1.74%, whereas the South Korean won, which usually moves in a similar manner, strengthened 0.45% against the dollar. The second-biggest loser on the day was the Malaysian ringgit that fell 0.508% against the dollar. The Dollar Index, which measures the greenback’s strength against major currencies, rose 0.34% to 82.862 points.

Since May, when speculation rose about the withdrawal of stimulus spending by the US, the rupee has depreciated more than 10%. Emerging market currencies have come under further pressure after the US Federal Reserve said last week that it may withdraw its bond buyback programme, ending the availability of easy money.

Stocks didn’t mirror the dramatic slump in the rupee market with the benchmark Sensex declining only 0.41% to 18,552.12 points, indicating that Wednesday’s slide was not accompanied by foreign institutional investors (FIIs) pulling money out.

“I will be really surprised if data show that FIIs sold off massively because the stock market has not reacted much. I think it is overdone on the currency front," said Manoj Rane, managing director and head of fixed income and treasury at the Indian arm of BNP Paribas.

External factors are at play in the currency’s depreciation, he said, although the extent of the decline was surprising. 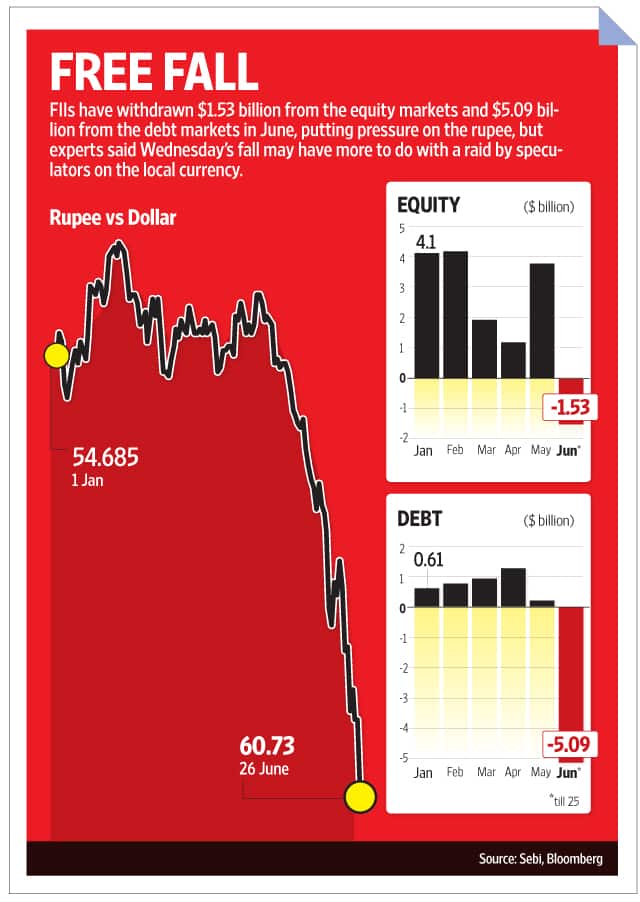 While some attribute the rupee’s movement to the outflow of dollars from the debt segment of the market, many currency dealers are of the view that the market is in the grip of speculators. Treasury heads of various banks confirmed that the sharp movement of the rupee in the past few days has forced them to limit their ‘open’ or speculative positions. However, in the absence of the larger institutions, smaller entities seem to be holding sway over the market.

“Clearly speculators have taken over. The currency should strengthen and once that happens, then these speculators will go away. For now, exchange rate will be under pressure in the next couple of days," Brahmbhatt added.

One indicator that speculators are operating is the surge in currency derivatives across exchanges. The Economic Times reported that currency derivatives, including futures and options, have registered a 50% jump in average daily turnover to over ₹ 60,000 crore in June against ₹ 41,000 crore in May, going by the combined data of the NSE and the Multi Commodity Exchange (MCX-SX).

“We are not into the derivative game now. It is madness for an institution like a bank to keep open positions in this market," said the head of treasury at a large public sector bank. “They are all retail, small and mid-corporate adventurers," said the banker who did not wish to be named.

Technical charts indicate the rupee should go to the 61-62 level soon.

“If the market sustains above 60 levels on a closing basis then there is a possibility that it might hit the next technical key level of 61," said Abhishek Goenka, CEO of India Forex Advisors Pvt. Ltd.

According to Ashwin Shetty, vice president, treasury at Dubai-based UAE Exchange, a firm that takes positions in global currencies, the rupee is seen at 62 per dollar level, going by technicals, and should then consolidate. Investors will try and push the rupee to this level in the absence of RBI, Shetty said.

“FIIs have pulled out from the debt market much more than the equity market. This shows FIIs are not dumping Indian markets. If they pull out from the equity markets then we can say there is some problem in FII front. That has not happened. The movement is liquidity-driven and not FII-induced," Shetty said.

Some currency dealers said the rupee’s movement on Wednesday was a rush toward achieving the technical level in the absence of strong RBI intervention. The thin volume in the interbank market is also adding to the sharp movement.

Even as the market is expecting an improvement in the current account deficit numbers to be released later this week, rupee weakness “may reverse some of the recent macroeconomic improvement," said Standard Chartered Bank in a research report.

“Our estimates show that a weaker INR can add to inflationary pressure, widen the fiscal deficit and slow capital inflows, without having a positive effect on the current account deficit. Rapid INR depreciation also affects business sentiment negatively as uncertainty rises and worries about a possible financial crisis set in," the report said.

“We see a need to stem currency depreciation, but scope for short-term fixes might be limited. While the Reserve Bank of India (RBI) has enough reserves to bridge a temporary balance-of-payments mismatch, the focus should be on medium- to long-term measures to improve the current account deficit and encourage stable foreign inflows," said the report’s authors Anubhuti Sahay and Samiran Chakraborty.

The bank changed its rupee view to 60.5 a dollar from 53 at the end of December.

Rajeev Malik, senior economist at CLSA Singapore, said the rupee could weaken further once the US easy money policy is wound down. Along with an improvement in US economic health, this will induce investors to withdraw from emerging markets and put pressure on the domestic currency.

“Overall, there is no change to our assessment that it’ll be difficult for Asian currencies to offset the evolving global capital flows cycle. This will be a reversal of the excessively easy global liquidity conditions which benefited Asian currencies. Volatility aside, more nominal depreciation lies in store for Asian currencies," Malik said in his report. The US government slashed its estimate for first-quarter economic growth on Wednesday to 1.8% from 2.4%.

The offshore market is also expecting pressure on the rupee to continue. According to Bloomberg, the three-month onshore rupee forwards fell 1% to 61.23 per dollar. Offshore non-deliverable contracts declined 1.2% to 61.49. Forwards are agreements to buy or sell assets at a set price and date. Non-deliverable contracts are settled in dollars.

J. Moses Harding, research head at IndusInd Bank Ltd, expects “some administrative actions from RBI to smoothen the run" as the rupee heads towards 61.50-62.00 a dollar.

Ashwin Ramarathinam and Krishna Merchant contributed to this story.