Flipkart’s largest funding may also be the trickiest to navigate

If Flipkart manages the new funds well, and uses it to gain scale and improve unit economics, it may continue to find new investors

Flipkart announced a massive funding round this week, after a gap of nearly two years. Although, at $1.4 billion, it’s the company largest, the backdrop for the funding is markedly different from previous funding rounds.

About two years ago, in July 2015, the e-commerce firm had raised $2.4 billion in three funding rounds over a 12- month period. Funds flowed in easily back then, not only for Flipkart, but also for its competitors and all forms of start-ups. Companies used these funds to provide huge discounts and gain customers, which in turn brought in a new set of investors.

In the past 18 months or so, investors have become a lot more discerning. They’ve realized India’s e-commerce opportunity is no longer as big as it once seemed to be. Their focus has shifted to unit economics and other efficiency parameters. Flipkart said in a meet organized by an investment bank late last year that its cash burn has reduced by around 25% from peak levels. The flip side is that growth has faltered in the past year. 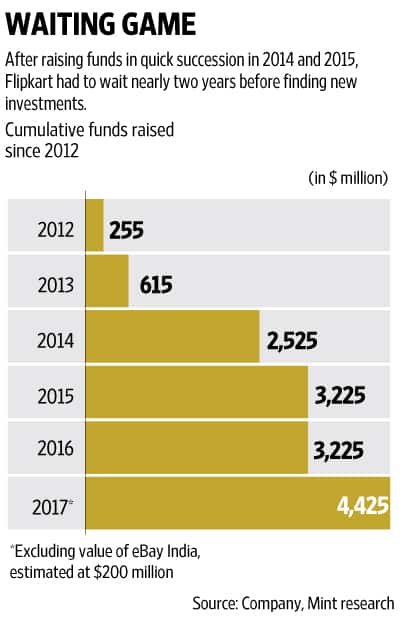 Among other things, the large funding by Tencent Holdings Ltd, eBay Inc. and Microsoft Corp. can be seen as a sign of approval for this more sensible strategy. As such, unlike previous years, Flipkart will be expected to use its freshly raised funds far more cautiously.

According to an analyst at a multinational bank, the new investors may well have included terms where funds are released based on certain milestones being met. With Amazon.com Inc. breathing down its neck with high levels of discounting in the Indian market, Flipkart could be walking a very tight rope, trying to protect market share as well as improve unit economics and reduce cash burn.

Having said that, Flipkart’s latest funding round provides the reassurance that there are still some takers for the Indian e-commerce story. In particular, that there is room for another large company alongside Amazon. While the growth opportunity may not be as big as estimated earlier, it is still clearly big enough to attract some investors. When funding had nearly dried up in the past 18 months, financial investor Morgan Stanley Institutional Fund Trust marked down Flipkart’s valuation to around $5.4 billion, or about 65% lower compared to its valuation in July 2015. The latest funding values the firm at $11.6 billion on a post-money basis.

Of the total equity issuance of $1.4 billion, about $200-250 million is estimated to be in exchange for eBay’s India business. The net inflow of $1.2 billion or so should easily suffice in terms of funding cash burn for another two years. If Flipkart manages these funds well, and uses it to gain scale and improve unit economics, it may continue to find new investors; especially since most of its competitors are gradually shutting shop.