Home >Market >Mark-to-market >IT sector: How the mighty have fallen

IT sector: How the mighty have fallen

IT sector's growth rate has fallen to single-digit levels in the past two years, and with no signs of recovery in sight, it isn't surprising that IT stocks have gone out of favour

Despite rapidly declining growth rates and a deluge of negative news flow lately, information technology (IT) stocks haven’t done all that badly in the past 10 years. The Nifty IT index has risen at a compounded annual growth rate of 7% since June 2007, slightly lower than the return of 8.6% in the Nifty 50 index.

But this masks how much IT stocks have fallen out of favour with investors. Ten years ago, they traded a premium of around 50% to the broader market in terms of the one-year forward price-earnings multiple. Now, they trade at a discount of over 10%.

The IT sector’s earnings growth, on an average, has been in the mid-teens and about double that of the broader markets in the past decade. But growth rates have fallen to single-digit levels in the past two years; and with no signs of recovery in sight, it isn’t surprising that IT stocks have gone out of favour. In fact, but for share buybacks and large dividend payouts, valuations would have fallen even lower.

One of the key reasons for the growth slowdown is the shift in technology spending patterns away from traditional IT services such as application maintenance. Customers are embracing new digital technology solutions such as social, mobile, analytics and cloud (SMAC), intelligent automation and the Internet of Things (IoT).

With technology budgets being under pressure, clients of IT services firms are increasingly cutting spends in traditional or legacy services. Earlier this month, U.B. Pravin Rao, chief operating officer, Infosys Ltd, said clients are asking for a so-called cost takeout of 20-30% of contract value in traditional services, with the view to reinvest it in new technology solutions.

Of course, it’s not that Indian IT services firms aren’t investing in building digital capabilities. Analysts at Citigroup Research say in a note to clients, “As per Nasscom, digital accounts for around 14% of India’s IT-BPM (IT-business process management) exports in FY17, up from around 4% in FY14. This naturally suggests digital has been growing at a much faster clip (CAGR of around 68%) versus traditional services (~6% CAGR), albeit on a much smaller base for India-heritage firms. Accenture and IBM report a significantly higher percentage of newer revenue and of course, EPAM and Globant can be considered pure-plays." 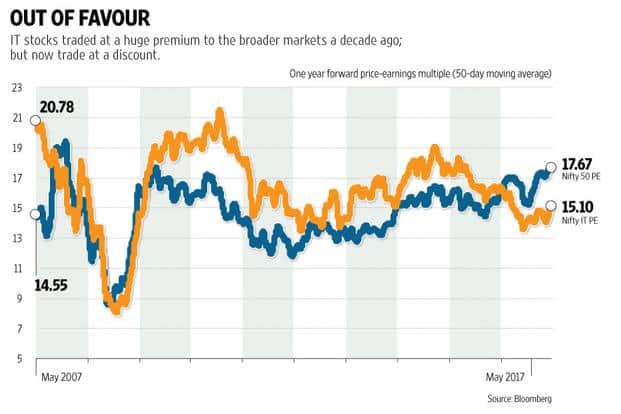 Shares of EPAM Systems Inc. have risen six times since listing in February 2012, while those of Globant SA have risen nearly four times since it listed in July 2014. Indian IT stocks, in stark contrast, have been flat in the past three years. It’s clear Indian firms are losing the battle for digital technology spends to such new firms as well as companies such as Accenture Plc, where digital services account have risen to around 40% of revenues. In short, Indian IT companies are facing the double whammy of a shrinking pie as far as their core strength in traditional services is concerned, and a small presence in fast-growing segments.

And as if this wasn’t causing enough pressure on the Indian IT industry, a number of other headwinds have emerged in recent years. Analysts at JP Morgan have identified about a dozen late last year. Some of the so-called “dirty dozen" are: “The rising presence of in-house (captive) centres of clients, which are eating into the pie for third-party providers; perceived lack of consulting capability of India IT and inadequate localization to exploit the digital wave; a question mark over the ability of vendors to retain automation benefits for themselves rather than substantially surrendering such gains to clients; wages rising onsite to combat anti-immigration rhetoric/action on the part of lawmakers; deep issues in the banking sector in Europe, which should inevitably impact spending; low interest rates in the US impacting profits of the US BFS sector and thus spending thereof."

In fact, given this backdrop of slowing growth and an increasing number of headwinds, Nomura Research analysts have been questioning the relatively low discount at which IT stocks are trading relative to the market. In a 6 June note, they said the discount is in line with the average for the past five years, even though things have deteriorated of late. Unless there is a dramatic turnaround, it looks like they are set for another long period of underperformance vis-a-vis the broader market.