"storyDirectUrl"
OPEN APP
Home >Market >Mark-to-market >Why are infrastructure stocks falling when order flows in roads are up?

Why are infrastructure stocks falling when order flows in roads are up?

The banking crisis may lead to tighter lending norms, and that is bad news for infrastructure firms that depend on financial institutions for day-to-day capital

There is frenzied activity in the roads sector. Contracts are being awarded one after the other with mid-sized construction firms queuing up for orders.

When a paltry 1,777km of contracts were awarded during the entire nine months ended December 2017, industry analysts estimated that the sector would fall short of its target for fiscal year 2018 (FY18). But, the National Highways Authority of India (NHAI) suddenly got its act together and has dished out nearly twice the quantum between January and March. The lumpy ordering should now take the total NHAI contracts up to 6,000km for FY18. 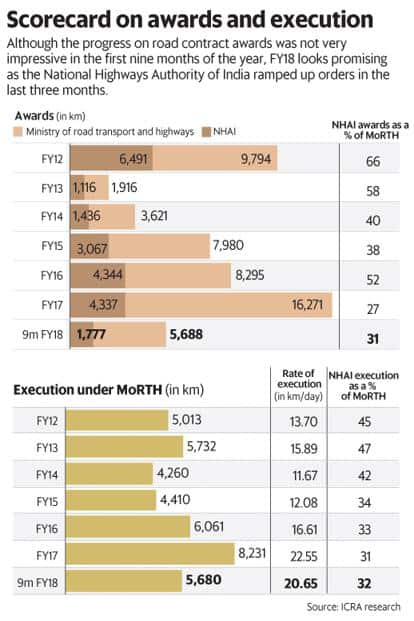 Strangely though, this largesse hasn’t enthused investors. On the contrary, shares of construction firms, even those with higher exposure to roads, have been rolling downhill since January, falling harder than the broader benchmark indices.

Why this adverse reaction?

One reason is the sombre mood on the Street. Also, the problems plaguing the financial sector may lead to tighter lending norms. This could affect the infrastructure sector that is highly dependent on financial institutions for funding needs and day-to-day working capital.

Besides, new concerns have cropped up. For instance, while the highway project Bharatmala Pariyojana is meant to give a thrust to the road network in the country, it is likely to impact existing toll projects. Icra Ltd in a detailed study found that 25 national highway toll road projects involving around Rs19,435 crore of debt may have risk to revenue and earnings due to Bharatmala Pariyojana.

These concerns have weighed over valuations that have become more reasonable after the recent steep correction in stock prices. The question is: should investors see an opportunity in these stocks after the recent price correction?

Yes; but it’s time to sift the chaff from the grain. There are firms such as Ashoka Buildcon Ltd, Sadbhav Engineering Ltd, Dilip Buildcon Ltd, IRB Infrastructure Developers Ltd, MEP Infrastructure Developers Ltd and NCC Ltd that have healthy financials and balance sheet ratios, along with robust execution of projects in hand. Further, these firms have bagged several road projects under the recent hybrid annuity model, taking their order books up to twice or thrice the current annual revenues.

The recent market correction has brought down some of their valuations to a third of what they were a year ago. According to Parikshit Khandpal, analyst at HDFC Securities Ltd, “Robust order flows since January should lead to strong revenue and profit expansion over the next two years. The earnings upgrade expected in the ensuing quarters therefore make stocks attractive at current valuations."

Typically, the sector has displayed higher volatility when compared to the benchmark indices. For instance, these stocks hugely outperformed the Sensex and even the BSE MidCap index when the equity markets were skyrocketing in 2017. So, it is likely that when the markets reverse, the construction sector may outperform again given that fundamentals too are on stronger ground.

Some large firms such as Hindustan Construction Co. Ltd, Punj Lloyd Ltd and IVRCL Ltd are burdened with high debt on account of unviable legacy projects stuck in legal entanglements and consequent cost overruns. Investors must be cautious and steer clear of stocks that may have fallen hard but whose recovery may be suspect.