OTHERS : Mumbai: Indian benchmark indices advanced for the fifth session on Monday led by gains in metal, banks and energy stocks. The rupee edged higher against the US dollar after India’s trade deficit narrowed from a month ago due to sharp fall in gold imports. Shares of finance companies continued their winning steak buoyed by hopes of easing regulatory environment following the appointment of a new RBI chief. The BSE Sensex surged 307.14 points to settle at 36,270.07 led by HDFC, HDFC Bank and Reliance Industries. The 50-share Nifty Index reclaimed the 10,900-level, but ended 82.90 points up at 10,888.35.The BSE midcap and smallcap indices rose 0.43% and 0.26%, respectively. Among the sectoral indices on BSE, metal rose most at 2.03% followed by energy, oil and gas, utilities and power, which rose over 1%. Tata Motors, Wipro, Vedanta, Coal India and Power Grid were among the top gainers on the key indices, whereas Kotak Bank, Infosys, Bharti Airtel, Hero MotoCorp. and Bajaj Finserv were among major losers.In global markets, European stocks declined and US futures erased gains after a mixed session in Asian markets as investors looked to the US Federal Reserve with the end of a volatile year approaching. Emerging market shares and currencies were steady. Oil prices were steady after falling 2% in the previous session, but remained under pressure amid weaker growth in major economies and concerns about oversupply. Here are the latest updates from the markets: 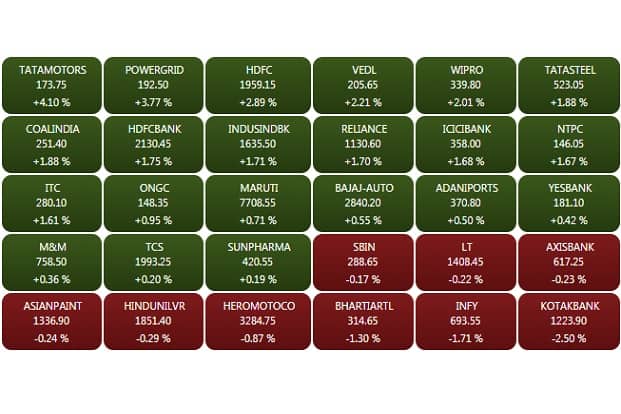 White Organic Agro Ltd shares jumped as much as 17.6% to Rs 79 after the company’s board of directors recommended a bonus issue of 1:1.

IDBI Bank shares rose as much as 0.5% to Rs 61.35 per share after the Delhi High Court rejected a plea by IDBI Officers Association against the LIC-IDBI deal, reported ET Now.

NMDC sues Karnataka over demand for higher share in sale

NMDC shares rose as much as 1.17% to Rs 95 per share after Reuters reported that the company filed a case in a court in Karnataka on Monday, objecting to the state government’s demand for higher share in sale of iron ore. The court will hear the matter on Jan. 10, Rajender Kataria, the state mining secretary, told Reuters. The Karnataka government intends to auction the iron ore mine because the company refused to pay an additional levy on the sale of its ore, he said.

Oil prices were largely steady on Monday after falling 2 percent in the previous session, but remained under pressure amid weaker growth in major economies and concerns about oversupply. Brent crude oil futures were at $60.31 per barrel at 0722 GMT, up 3 cents, or 0.05 percent, from their last close. U.S. West Texas Intermediate (WTI) crude futures were at $51.27 per barrel, up 7 cents, or 0.14 percent. Persistent growth in U.S. shale output continues to weigh on oil prices, while some analysts doubted that planned supply cuts led by the Organization of the Petroleum Exporting Countries (OPEC) would be enough to rebalance markets. Reuters

Shares of Kotak Mahindra Bank fell over 3% on Monday after the Bombay High Court refused to grant stay on 31 December deadline given by the Reserve Bank of India for promoter stake dilution. The next hearing will be on 17 January, Bloomberg reported. In intraday, the Kotak Bank shares declined as much as 3.2% to hit a low of Rs 1,215.10 per share. At 12.28pm, the Kotak Bank stock was trading at Rs 1223 on BSE, down 2.6% from its previous close. Read more

Power Mech Projects shares rose as much as 2.9% to Rs 951.75 per share after the company said it has received order worth Rs 245 crore.

Biocon shares down over 2%

Biocon Ltd said that the USFDA has concluded an inspection at the company’s manufacturing facility in Telangana without any observation and issuing a Form 483. Biocon shares traded .41% down at Rs 630.75 per share, and hit a low of Rs 628.90 per share. In early trade, the stock rose as much as 1.24% to Rs 654.40 per share.

Shares of power producer NTPC Ltd rose as much as 5.5% to Rs 151.35 per share, their highest since Nov 20. Jefferies said in a note that the Central Electricity Regulatory Commission (CERC), in its draft, allowed energy charges per unit of power to be calculated with a variation of 85 kilocalorie to billing on actual gross calorific value of coal received, giving NTPC the benefit of about 2.7 pct on its coal cost. “With the regulation overhang behind us, we think NTPC should see a reversal of the recent correction,” added Jefferies. The brokerage raised target price to Rs 210 from Rs 143.50, maintaining “buy” rating.Separately, NTPC said on Sunday it acquired Barauni Thermal Power Station in District Begusarai, Bihar. NTPC posts its biggest intraday pct gain since July 10, 2017. More than 6.8 mln shares traded as of 0440 GMT, vs 30-day moving avg of around 8.8 mln. Reuters

Tata Motors shares jumped as much as 5.3% to Rs 175.90 per share. Jaguar Land Rover (JLR) will announce plans early next year to cut thousands of jobs as part of a turnaround strategy, the Financial Times reported, citing several unidentified people close to the company. The UK luxury carmaker, owned by India’s Tata Motors Ltd, will outline the measures in January as part of a three-year cost-cutting program, the report added. 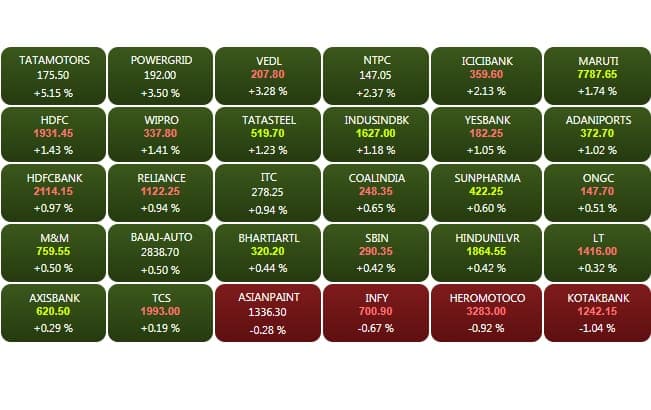 Hotel Leelaventure shares up over reports of property sale

Hotel Leelaventure shares jumped as much as 4.7% to Rs 15.55 per share after Mint reported that Canada’s Brookfield Asset Management is close to buying at least four of five luxury hotels and a large land parcel owned by debt-ridden Hotel Leelaventure Ltd for about ₹4,500 crore. The stock latest hit a low of Rs 14.80 per share.

Max India shares up over 6%

Jet Airways shares fell as much as 4.1% to Rs 249.05 per share after Mint reported that the State Bank of India (SBI) has ordered a forensic audit of the books of Jet Airways (India) Ltd to examine the feasibility of restructuring its debts and identify potential red flags in accounts. The audit has been awarded to EY LLP, which will probe the troubled airlines’ books between 1 April 2014 and 31 March 2018.

Vedanta shares rose as much as 6.5% to Rs 214.25 per share after the National Green Tribunal on Saturday ordered the reopening of Sterlite Industries Ltd’s copper smelter plant in Tamil Nadu’s Thoothukudi, months after the smelter was ordered shut by the Tamil Nadu government over alleged pollution that led to violent protests and culminated in police opening fire on demonstrators and killing 13. The Tamil Nadu government will move the Supreme Court against the NGT’s order.

Rupee gains against Us dollar

The Indian rupee strengthened marginally against the US dollar after India’s trade deficit narrowed from a month ago due to sharp fall in gold imports. At 9.15am, the rupee was trading at 71.84 a dollar, up 0.08% from its Friday’s close of 71.90. The currency opened at 71.85 a dollar. The 10-year government bond yield stood at 7.438% from its previous close of 7.441%. So far this year, the rupee has declined 11%, while foreign investors have sold $4.55 billion and $7.36 billion in the equity and debt markets, respectively.

Eye on fiscal deficit, govt may carry over subsidy bills

The Narendra Modi government allocated ₹2.9 trillion for various subsidies in the 2018-19 budget, including ₹24,933 crore for petroleum subsidy. https://t.co/U4mvzm2OG2

Oil prices climbed after US drilling activity fell to its lowest level in about two months, but increasing concerns about weaker growth in major economies kept a lid on gains. International Brent crude oil futures were at $60.37 per barrel, up 9 cents, or 0.2 percent, from their last close. US WTI crude futures were at $51.44 per barrel, up 24 cents, or 0.5 percent.Metals: Most base metals rose in early trade, starting a new week with cautious optimism that China and the US will be able to resolve a trade row that has weighed on prices for most of this year, although weak economic data capped gains. The most-traded February copper contract in Shanghai edged up 0.1 percent to $7,122.38 a tonne. Three-month LME copper was flat at $6,132 a tonne. Shanghai nickel rose 1.5 percent, tracking a more than 2 percent jump in LME nickel on Friday.Gold prices inched down on Monday ahead of a US Federal Reserve meeting this week, pressured by a robust dollar as investors outside the US sought the safety of the greenback amid global growth concerns. Spot gold had slipped 0.2 percent to $1,236.30 per ounce. Prices on Friday hit their lowest since Dec. 4 at $1,232.39. U.S. gold futures were down 0.1 percent at $1,239.3 per ounce. Reuters

Stocks in Asia opened mixed, following two weeks of losses driven by a backdrop of uncertain trade conditions and signs that some key economies are slowing. Treasury yields steadied just below 2.90 percent. U.S. equity futures edged up with stocks in Japan and Australia, while shares slipped in Shanghai and Hong Kong. Treasuries held last week’s gains and the yen was steady after a bout of risk aversion that hammered global equities in recent sessions.Japan’s Topix index added 0.3 percent as of 11:20 a.m. in Tokyo. Shanghai Composite Index was down 0.5 percent. Hang Seng Index down 0.3 percent. Australia’s S&P/ASX 200 Index rose 0.1 percent. Futures on the S&P 500 rose 0.3 percent. The S&P 500 Index fell 1.9 percent on Friday. Bloomberg