New York: Using FBI wiretaps, email, phone records and the testimony of a Goldman Sachs Group Inc director, US prosecutors drew a picture for jurors on Thursday of events that led to the insider-trading trial of onetime corporate star Rajat Gupta. 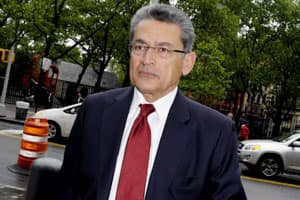 Gupta, also onetime head of McKinsey & Co management consultancy, is the most prominent corporate figure indicted in a broad US government crackdown on insider trading in recent years in which dozens have been convicted. He denies the charges and says prosecutors have no direct evidence.

On the fourth day of Gupta’s trial in Manhattan federal court, William George, a Goldman board member since 2002, affirmed on the witness stand that the investment bank’s policy prohibited discussion of board meetings with outsiders.

He confirmed that a 28 June 2008 board meeting at the Hotel Astoria in St Petersburg, Russia, had included discussion of Goldman possibly acquiring a commercial bank. Rajaratnam and Gupta were recorded on a wiretap a month later talking about it, but that is not included in the indictment.

In one of the six charges, prosecutors contend that Gupta tipped Rajaratnam, in an illegal breach of his fiduciary duties, about a deal on 23 September 2008 that gave Goldman a $5-billion boost from renowned investor Warren Buffet’s Berkshire Hathaway Inc when markets were in crisis.

One of the government’s next witnesses on Friday or early next week will be former McKinsey manager Anil Kumar, who was once friends with both Gupta and Rajaratnam. Kumar pleaded guilty to criminal charges and testified against the hedge fund manager at his trial a year ago.

In testimony on Thursday, a McKinsey technology and security manager confirmed phone records of calls made on 23 September 2008 by Gupta from an office he still had at McKinsey in New York. The office was provided as a courtesy to former managing directors. McKinsey has since severed relations with Gupta.

The jury was shown a document detailing the time he called into a special Goldman board meeting convened to approve the Buffet deal. When the call ended at about 03.53 pm. New York time, he dialed Rajaratnam at Galleon Group, the document showed.

There is no FBI wiretap of that call, which ended at about 03.55 pm, but prosecutors played the jury a conversation recorded early the next morning between Rajaratnam and his principal trader, Ian Horowitz.

“I got a call, right, saying something good’s gonna happen," Rajaratnam told Horowitz, who was not in the office on 23 September 2008. The jury heard Rajaratnam say that it was 3:58 - just two minutes before markets closed - when he ordered traders to buy Goldman shares. Galleon made about $840,000 in illegal profits.

Prosecutors, who played a tapped phone call on Wednesday of Gupta and Rajaratnam casually discussing business in July 2008, on Thursday presented email evidence of their friendship.

On 10 February 2007, Gupta responded to an email from McKinsey & Co director Marshall Lux, who wrote to tell him he had joined the board of the Harlem Children’s Zone, a charity that Rajaratnam supported.

“Congratulations... Raj is one of the most outstanding hedge fund managers and a very close friend," Gupta’s email said.

Rajaratnam, whose firm had $7 billion under management at its peak, was convicted of 14 criminal charges. He is serving a prison term of 11 years.

Another allegation in the indictment is that Gupta told the hedge fund manager about the sale of P&G’s Folgers coffee unit to J.M. Smucker Co for $3 billion before the 4 June 2008 public announcement of the deal. J.M. Smucker Co Chief Financial Officer Mark Belgya testified that details were intended to be kept confidential until a joint press release by the companies.