According to the company, growth in the print business was subdued partly due to heavy rains and the resultant floods in major areas of its operations.

Digital advertising revenue grew at a faster rate, but its contribution is too small to make a meaningful difference at this stage.

The faster rate of increase in staff costs and other expenses meant operating profit declined 2.2% to Rs121 crore.

Operating profit declined 230 basis points to 26.4%. One basis point is one-hundredth of a percentage point. 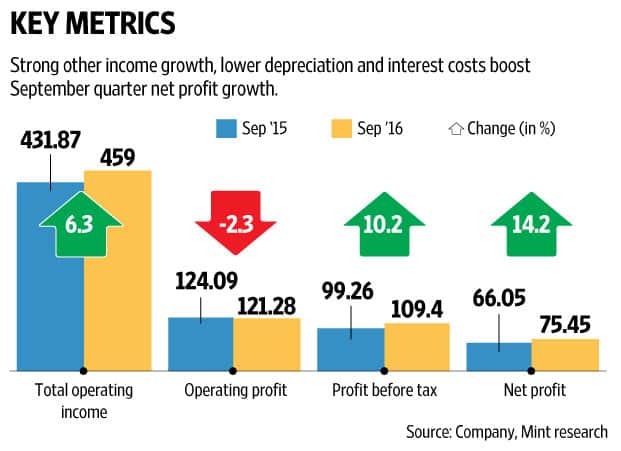 However, strong other income growth, a decline in depreciation and interest costs and a slower pace of increase in tax outgo boosted net profit growth. Net profit increased 14% to Rs75 crore.

The Jagran stock trades at nearly 15 times estimated earnings for this fiscal and the valuations may appear reasonable in normal circumstances. Even so, post-demonetization, the outlook has changed for the worse for the print media, at least in the near term.

Local advertisers contribute a big chunk of advertisements, and analysts expect that to take a hit in the coming days. Categories such as real estate, jewellery and consumer durables are expected to slow down. Sure, higher advertisements from digital payment firms could offer some comfort but that may not be enough to fully compensate for the slowdown in other areas.

“Further, due to demonetization, election-led spends by political parties would also get impacted," wrote analysts from Emkay Global Financial Services Ltd in a report on 16 December. The brokerage has cut its print ad growth assumption to 5-10% for FY17-18 versus 11-11.5% earlier.

What’s the silver lining in this story? The company’s radio business subsidiary, Music Broadcast Ltd, has filed a draft prospectus with the Securities Exchange Board of India (Sebi) for an initial share sale. A higher than expected valuation in the radio business through the share sale could be a positive trigger for the stock, says Emkay.

Still, weaker advertising outlook for the print industry in general is likely to cloud sentiments for the stock from a near-term perspective. Even after Monday’s 2.5% rise, the Jagran Prakashan stock has appreciated less than 1% this year.

HT Media Ltd, the publisher of Mint, competes with Jagran Prakashan in some markets.