This year, ensure your finances are clutter-free and easier to track. Here's what you can do

For the uninitiated, it is important to start saving and investing, and having other basics like an emergency fund and insurance in place. For those who are in the middle of their financial planning and investment journey, it is not just about taking stock of the investments, but also taking care of the hygiene factors in your finances. Here are five things you must do.

According to a survey on money habits of Indians by Exide Life Insurance, one in three Indians do not keep their families informed about their financial dealings. Financial advisors highlight how not having family members or even the spouse involved in financial decision-making is a challenge. “Normally, it is only one person who is taking the decisions in a family. This aspect (of involving family) is something that is missed out a lot of times," said Suresh Sadagopan, a certified financial planner and founder, Ladder7 Financial Advisories.

This happens because many people find discussions on finance boring and have an aversion to numbers, said Prakash Praharaj, founder, Max Secure Financial Planners. So how can that be resolved? “We have observed over the years that only talking numbers, savings and SIPs does not get the spouse or the family involved. We try to involve the family in discussions on experiences they can have. For instance, as soon as we start discussing plans for vacations, other family members get involved in the discussions. Similarly, if the spouse is interested in a particular type of house, then we can structure our discussion and plan around that. Younger people are more interested in discussing and planning vacations and not really about possessions," he said.

It is also important to instil the right attitude towards money, especially in children. “Children must be taught that the money that they see is not an entitlement. They need to be taught to buy something only when it is a need, or postponing things that are not immediately needed. Also, what could be the most beneficial time or place to buy such things needs to be taught," said Deepali Sen, founder, Srujan Financial Advisers LLP. Showing the math is still easier, what is difficult but critical is hardwiring the attitude towards money and being able to distinguish between right and wrong, she said.

Often, people have multiple bank accounts, insurance policies as well as investments. “A lot of people end up with multiple mutual fund schemes, bank accounts and multiple bank lockers. So, management of their money becomes a challenge because they have spread themselves too thin. Therefore, try to consolidate so that there is a healthy blend of diversification and at the same time management of money becomes easy," said Vishal Dhawan, founder, Plan Ahead Wealth Advisors.

People keep opening new accounts as they move jobs or cities, but often forget to close the earlier ones. “I have come across instances where there are 10-12 accounts and some small amount is lying everywhere. Similarly, there are post office accounts that people opened at some places that became inactive and the amount is still lying there. They have to transfer all of these savings at one place. I understand there is effort involved in doing all of this, but at some point of time you will have to get it done," Sadagopan said.

Many households consider even discussing the subject of making a Will inappropriate. According to the Exide Life Insurance survey, only 14% respondents have put a Will in place.

However, absence or presence of a Will can be critical to avoid disputes for the next generation and to distribute your wealth and possessions as per your choice. For people who do not have a Will, it is definitely a good time to sit down and get one going.

For those who have a Will need to make sure it is updated, so that it can be used in case of an eventuality. “There are people who have a Will in place but changes in family structures and beneficiaries have not been updated in Wills," Dhawan said.

However, it doesn’t make sense to keep updating the Will every year or two. So, suggested Sen, it is better to include a clause that states clearly that the assets acquired after the date of the Will should also go to the beneficiary.

Another related hygiene factor that gets missed often is having nominees and beneficiaries in all of your financial investments and keeping it updated. “This happens all the time. In every case, there are one or two instances where people have not done this," Sadagopan said.

Most people have a rough estimate of what they spend. But invariably, there is a wide gap between what they think they spend versus what they actually spend. “In most cases this happens because they do not count one-off expenses as part of their expenses at all. And those one-off expenses keep repeating," Dhawan said.

To understand this better, recall your irregular purchases like buying clothes or a mobile phone. Such expenses do not get counted in regular monthly expenses, but are actually going out of the same pool of money when calculated on an annual basis.

This also happens with cash that comes in at irregular intervals, like a bonus or a one-off payment. “Money lying idle has a tendency to attract expenses, and many people do not even realise where the money goes," Sen said. For instance, some people try to write-off children’s school fees with a one-time bonus they get, but when actually calculated, the fees is lower than the bonus and they have no record or recollection of where the remaining money went, she said.

Hence, not just monthly expenses, also keep a track of irregular expenses to get a real picture of your expenses. 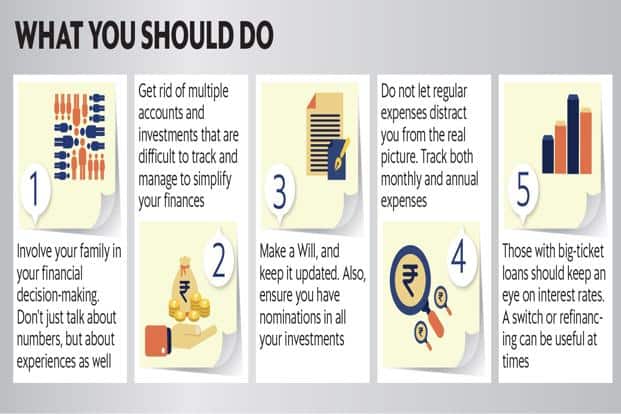 Loan pricing in India has moved from prime lending rate to base rate to marginal cost of funds-based lending rate. This is again going to change in April when new floating rate retail loans will start to be benchmarked to an external benchmark. All the newer systems are better in pricing and transparency compared to the previous ones. This is specially true for big-ticket loans like housing loans. Hence, in a lot of cases, when an older borrower has looked at what is the deal that a new borrower is getting in the market, they have been disappointed. “So they might find it beneficial to think about refinancing their existing loans, despite the fact that there might be some processing fee involved. Also, many people take a loan keeping the tax benefits in mind. They need to take a decision on whether making a partial or complete repayment will be beneficial to them," Dhawan said.

At present, many borrowers who took base rate-linked loans before 2016 move to MCLR-linked loan for better interest rates. In the past, banks have been observed to be increasing rates faster when RBI rates go up, and not being equally quick in reducing the rates when overall rates go down. This is expected to change with external benchmarking of retail loans from April. Though finer details are not out yet, it can be said that people on older systems of loans like base rate or MCLR could explore moving to the new system once it goes live.

These are not the only hygiene factors or mid-way corrective measures you need to consider. There could be other things, like taking stock of your financial goals and the progress in relation to those, that may need to be looked at.

Moreover, the feasibility of the measures listed above would vary from person to person. Choose your bit, but act on it to make your finances simpler and uncluttered in the future