Home / Market / Mark-to-market /  RBI’s message: All is well, for now
Back
Share Via

RBI’s message: All is well, for now

RBI's decision to hold rates is surprisingly optimistic, but also shows it's unclear about the demonetisation impact on the economy

Remember the rallying cry, “All is Well" in times of trouble from the movie 3 Idiots? That seems to have been the inspiration behind the Reserve Bank of India’s (RBI’s) surprisingly optimistic line on the impact of demonetization on economic growth on Wednesday.

The central bank believes that gross value added (GVA) growth will shed only 15 basis points due to the withdrawal of the legal status of 86% of the currency in circulation. For 2016-17 as a whole, RBI cut its estimate of GVA growth by 50 basis points, mainly due to the loss of momentum in the September quarter. A basis point is one-hundredth of a percentage point. 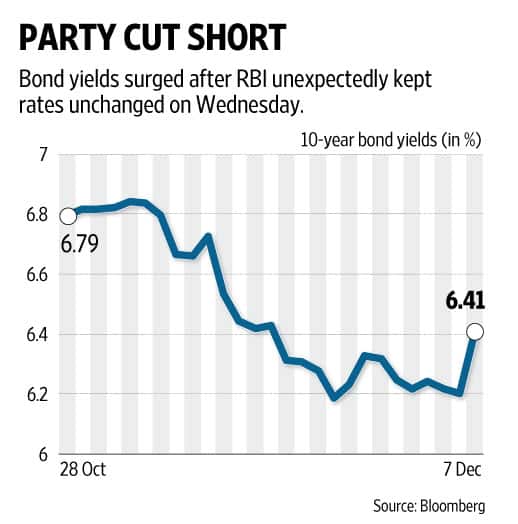 But perhaps signalling “All is Well" is not entirely the reason for RBI’s decision to keep interest rates unchanged. One other reason is that the central bank itself doesn’t know the impact of the currency withdrawal on the economy. To its credit, the policy statement does say that it is appropriate to look through the transitory but unclear effects of the withdrawal of currency.

What’s more, RBI doesn’t seem to know clearly when monetary conditions will go back to normal—it adroitly evaded that question at the press conference. In the circumstances, it was sensible to wait till the fog of uncertainty dissipates a bit before taking a decision on rates.

The central bank chose to underplay the impact of demonetization through the two channels flagged by it. It said disruptions in retail trade, unorganized sector and drop in discretionary spending are temporary, while a dent in aggregate demand due to loss of wealth won’t be significant. What markets perceived to be a destructive storm, RBI thinks it to be at best a squall.

Nevertheless, while the unorganized sector doesn’t contribute that much to economic growth or even to state revenues, it employs a large population and the share of this population in demand is substantial.

The professional forecasters’ median forecast of private final consumption expenditure for the current fiscal year has been pared down by 1.1 percentage points. The risk remains that the central bank may be severely underestimating the disruptive effects of demonetization.

Another signal that RBI perhaps wishes to send by keeping rates unchanged is that it as well as the monetary policy committee are independent and do not cower to the government’s demands. RBI governor Urjit Patel did gain some credibility by dismissing a windfall dividend transfer to the government in the wake of demonetization, although some analysts point out that he added the qualifying phrase “as of now".

We now at least have some clues about RBI’s thinking. The central bank has not covered itself by glory by the way it has handled the demonetization episode and it was a shame that journalists from The Economist and the BBC were kept out of the interaction on Wednesday. This is not the way for RBI to go about repairing its dented image.