Madrid: The world’s biggest cryptocurrencies rose again on Tuesday, extending their April rally deep into its fourth week and taking this month’s increase to more than 75%.

Ethereum, Bitcoin and EOS helped lead the advance, prices compiled by Bloomberg and Coinmarketcap.com show. Market leader Bitcoin climbed 4.4%; its trading volume in the 10 biggest exchanges has topped $2 billion during the past 24 hours — similar to Alphabet Inc.’s daily volume — according to Coinmarketcap.com.

“The backdrop is less negative," said Marc Ostwald, global strategist at ADM Investor Services in London. “The noise from regulators has been far less destructive in recent weeks than since the end of last year, and we haven’t had a big theft from an exchange recently." After the January crash, and several selloffs that were sometimes attributed to traders getting spooked by market events or crypto heists, Bitcoin’s recent rally has taken it back up to its level in early March.

“A lot of people who trade Bitcoin do it off technicals, the same as any commodity, like wheat or oil," Ostwald said. “For some of them, there’s clearly a downtrend broken, after a double-bottom." 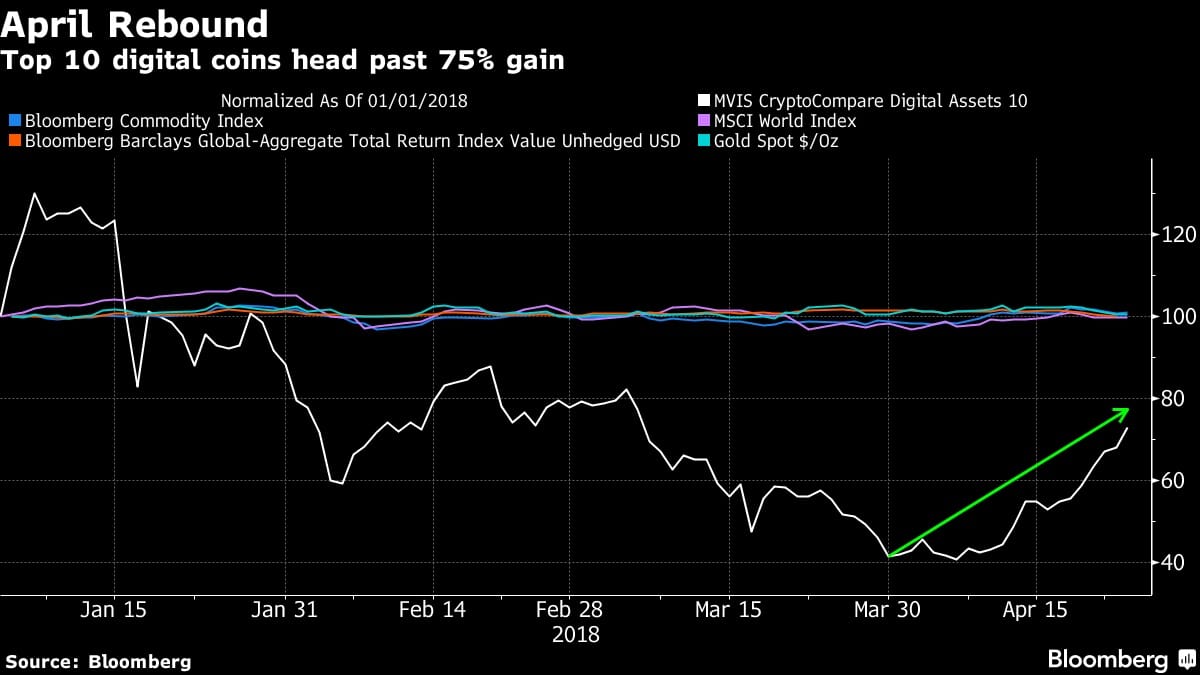 The digital coin surge in April coincided with many of the world’s stock and bond markets struggling for direction. Traders in traditional assets have had to factor in higher yields and inflation forecasts, as well as the shifting narrative of the US and China trade dispute and tensions between America and Russia.

Even with their 76% jump in April, the 10 most liquid digital coins as a group still trade more than 40% below their record high posted in early January. Bloomberg