Why the ghosts of 2013 won’t haunt Indian rupee

HDFC predicts a recovery to 68.50 per dollar by year-end

Mumbai: India’s rupee has breached the record low set in 2013 and yet there’s hardly a sense of panic among investors.

While an impending Federal Reserve action is once again the trigger for currency losses, confidence in Asia’s third-largest economy has grown over the last three years as policy makers succeeded in narrowing the current-account deficit and taming inflation. At the same time, a war chest of foreign-exchange reserves is seen coming handy to cushion local markets from global shocks.

The currency glided to a new low of 68.8650 per dollar on Thursday amid a 2.9% decline this month, far less dramatic than the 8.1% plunge seen in August 2013 after the Fed signalled it would end bond purchases. The rupee’s loss this month is the smallest in the group of currencies Morgan Stanley in 2013 named the “fragile five" given a dependence on foreign investment to fund current-account deficits made them particularly vulnerable.

“The rupee’s losses are in the middle of the pack relative to other Asian currencies, a far cry from the 2013 taper tantrum experience when it was one of the hardest-hit currencies," said Khoon Goh, Singapore-based head of Asia research at Australia & New Zealand Banking Group Ltd. “India’s economic fundamentals have greatly improved from three years ago and while the rupee will not be immune to dollar strength, it will be more resilient this time."

The following charts show the transition in India’s economic fundamentals: 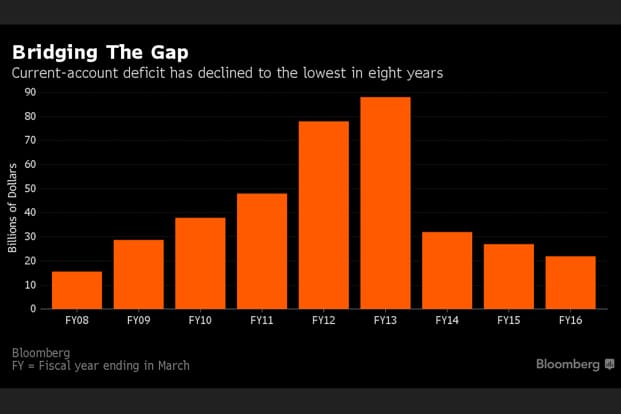 “India is a different story today than it was in 2013," said Tushar Arora, a senior economist for treasury at HDFC Bank Ltd., the top rupee forecaster based on Bloomberg’s quarterly rankings. “In the first quarter next year, I don’t think the rupee will be an underperformer in terms of depreciation. It should be relatively better than other emerging markets."

Arora predicts a recovery to 68.50 per dollar by the end of the year. The currency closed at 68.7475 in Mumbai on Thursday. India has been a beneficiary of the drop in Brent crude prices over the last three years as the nation imports about three-quarters of its oil. That, along with other measures taken by policy makers, has helped ease inflation in the world’s second most-populous country. Foreign holdings of rupee-denominated government and corporate bonds have fallen by Rs16,900 crore ($2.5 billion) since the end of September, when they rose by Rs17,400 crore. The stockpile fell by Rs74,700 crore between June and November 2013.

A potential increase in US interest rates next month notwithstanding, emerging markets have also been weighed down by concern that President-elect Donald Trump will take a more protectionist approach to trade.

“In the days of anti-globalization rhetoric, the countries with a strong domestic market will be preferred over trade-oriented countries," said Kim Jinha, Seoul-based head of global fixed income at Mirae Asset Global Investments Co., which manages $83 billion worldwide. “India is quite unique in the emerging-market space, since it is neither a commodity-exporting country nor a manufacturing country, which creates a less vulnerability toward external headwinds." Bloomberg