Apart from sugar prices, investors should keep their eyes on government moves to control prices and developments in the next season

What impact stringent stock limits will have on rising sugar prices can be debated, but the government’s desire to keep a check on prices is clear. The timing is not by chance. The festival season has started, peaking with Diwali in October and Christmas in December. Low supply and high demand can see prices and tempers both flare. Add important state elections to the mix and that makes for bad headlines, explaining the government’s desire to ensure adequate supplies.

Actually, sugar prices have been calm since end-April when the government imposed stock limits on dealers. Of course, they have gained significantly before that. Domestic sugar prices are up 17% since January and by 41% over a year ago. Sugar mills are finally making money on sugar, after years of losses or low profitability, in addition to what they earn on co-generation of power, alcohol and ethanol. 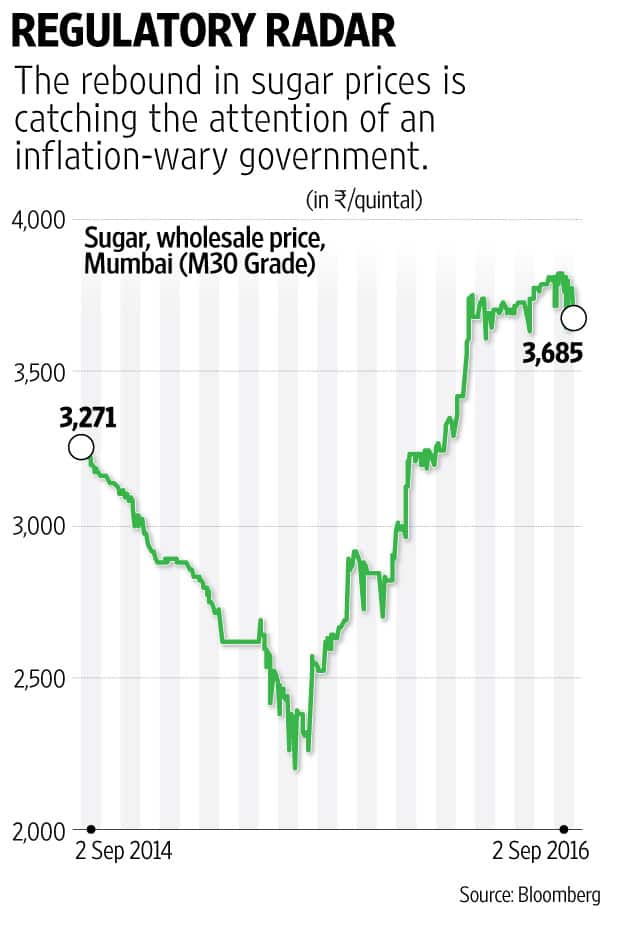 What is not clear is if the government is pre-empting an increase in prices or wants them to fall. The government has asked sugar mills to offload stocks in excess of 37% of the total sugar available in the 2015-16 sugar season by end-September, and 24% by end-October. The sugar season starts in October. Availability can be defined as opening stocks plus production less closing stock.

Now, mills may have been holding on to stocks, waiting for prices to peak in the next few months. That’s good business sense. But the government is having none of it. A report in the Times of India, dated 6 September, says factories in Kolhapur district have stocks of up to 57% and those in Sangli district 44%, and a total of 3.2 million tonnes of sugar will hit the market in September.

Factories will scramble to unload stock on to dealers, who in turn may push it out to the market immediately, if their stock limits don’t permit them to hold more.

There could be regional variations here, such as Maharashtra showing a different trend from Uttar Pradesh. North-based Balrampur Chini Mills Ltd’s management told CNBC TV18, according to a report on moneycontrol.com, that they don’t expect an adverse impact due to this development. Market prices in the next one to two months should give a good idea of the ground impact.

Mills don’t need the support now that prices are up but the government is asking them to return the favour. The bigger question facing the industry is what will happen next season. Latest Kharif sowing data shows a 7.7% decline in the area under sugarcane cultivation. A lower crop means farmers will ask for higher cane prices and they will cite higher sugar prices as a valid reason.

Governments may have no choice but to agree. The Central government fixes the fair and remunerative price while some state governments also offer a higher state advised price. Also, UP goes to elections next year. In an election year, its farmers may get what they want. Worse, with sugar prices having gained so much, the government may offer fewer sops to sugar mills.

Investors are already fearing the party is about to lose its momentum. Sugar shares are down since early August, with Balrampur Chini’s stock down by 19.8% and Bajaj Hindusthan Sugar Ltd’s down by 13.7%. Apart from sugar prices, investors should keep their eyes on other government moves to control prices, and developments in the next season such as the cane price and continued government support.