Will Sensex, Nifty get hurt if Trump rally fizzles out?

Sensex, Nifty fell on concerns over Donald Trump's ability to follow through with his policies, but analysts say liquidity that has fuelled the rally in India will continue

Mumbai: Indian stocks fell for a third straight day following a sell-off in global markets, but this is just a lull in the bull run in the country’s stock markets, most analysts said.

Globally, the fall was caused by investor concerns over US President Donald Trump’s ability to follow through with his policies.

But with global fund managers still believing that emerging markets are undervalued, the liquidity that has fuelled the rally so far in India will continue, said analysts.

On Tuesday, US stocks had their worst day in six months as investors feared that Trump’s failure to repeal Obamacare may mean his pro-growth tax reform policies would hit a roadblock. That led to a sell-off when Asian markets opened on Wednesday; the Sensex and Nifty shed around 1% at the close of trading. 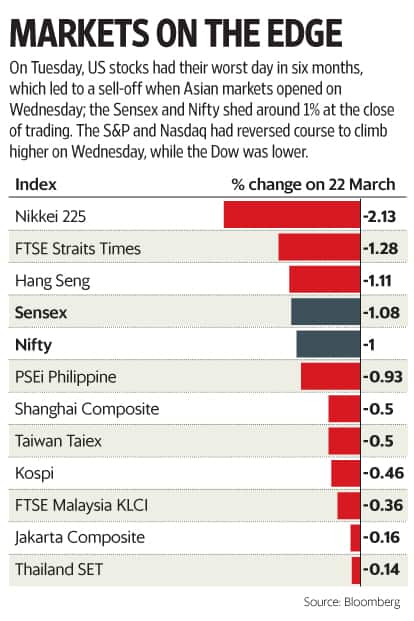 Since the beginning of the year, the MSCI Emerging Markets index has gained 12.85%. The Sensex and Nifty have gained 14.5% and 13.7%, respectively.

“Consolidation for Indian markets is healthy before it prepares for another up-move. There is no downside seen in the market as India growth story remains intact. Any fall in the market now provides an opportunity to enter," said Rajat Rajgarhia, managing director, institutional equities, Motilal Oswal Securities.

Apart from the India growth story, what could help the liquidity inflow are softer US bond yields and a dollar which has not strengthened as much as expected.

Since the US Federal Reserve hiked rates on 15 March, the dollar index, a gauge of the US greenback’s strength against a basket of currencies, has fallen 0.88%, while the 10-year US bond yield has fallen only 8 basis points.

Emerging markets will likely benefit from fund inflows as a result. A Bank of America Merrill Lynch survey of global fund managers found that 44% of investors think emerging markets are still undervalued while US equities are the most overvalued.

Foreign money continues to drive Indian equities. So far in March, foreign institutional investors have bought $3 billion worth of stocks—more than what they purchased in the preceding 10 months.

Still, a few analysts warned of risks from rising valuations, uncertainties around corporate earnings and the impact of the goods and services tax (GST).

“Almost all positive triggers are factored in the market and investors seem to be overlooking the disruptions that the GST rollout may cause," said Ambareesh Baliga, an independent market analyst.