The IDBI Bank stake sale to LIC is similar to dumping toxics into the ocean. Too much dumping will kill the fish in the ocean

How many glasses of water can we take from an ocean? Countless if the ocean is Life Insurance Corporation of India (LIC).

It is no wonder that the government keeps dipping into the vast waters of LIC to bail out other companies it owns.

After all, the insurer has the bandwidth given to it by its customers to keep swallowing shares thrown at it. LIC has invested in every divestment programme of the government and holds stakes in almost every public sector bank. 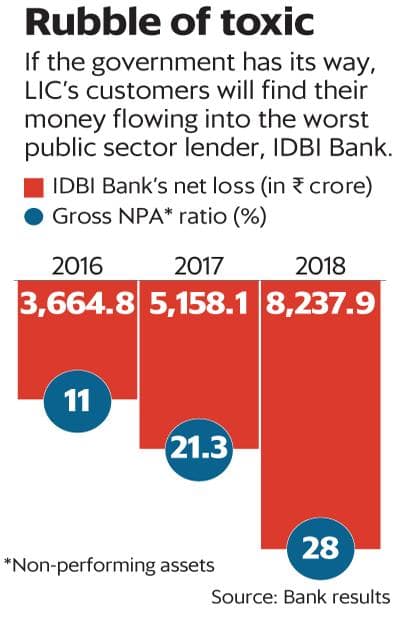 This time, the government wants LIC to become the promoter of IDBI Bank, the public sector lender with a third of its assets already toxic.

The government’s desperation is palpable. Looking at the fate of Air India’s divestment plan, it has no guts to ask for private equity for another shoddily run company. The latest capital infusion went into a sinkhole of stressed assets. What better way to wash its hands off by palming IDBI Bank to another company it owns? It is like asking the eldest child to take care of an errant sibling.

It can be tempting to see that LIC’s ₹ 30 trillion balance sheet dwarfs that of IDBI Bank and hence to think that the insurance behemoth’s might will infuse some strength into the beleaguered bank.

But managing about ₹ 55,000 crore of NPAs and another ₹ 60,000 crore that are stressed is no easy task. Add an unstable management with no long-term chief in sight and it is a disaster in the making.

Especially when LIC has a solvency ratio far lower than its private counterparts and is also losing market share to everyone.

Granted, it is still the king of insurance but the crown is indeed wobbly.

As a promoter, can LIC keep infusing capital into IDBI Bank? LIC has no capital of its own and all of its money is from life insurance it has sold to the public. Is it fair on its customers to find their money flowing into toxic assets?

Capital needs of IDBI Bank over the next 2-3 years will be significant and none of it would be for growth.

The only saving grace is the retail book and the deposit franchise. With a cumulative loss of ₹ 13,396 crore for FY17 and FY18, IDBI Bank has put or is in the process of putting on the block its stake in most subsidiaries and other non-core assets.

The IDBI Bank stake sale to LIC is similar to dumping toxics into the ocean. Too much dumping will kill the fish in the ocean. A bleeding LIC is far more dangerous than a bleeding bank.

What of IDBI Bank? Perhaps a repeat of the 2004 formula—transferring IDBI Bank’s toxic assets into a stressed asset stabilization fund is the answer.