Delayed recovery in tractor sales may eat into profit margins, which in turn could affect valuations

Mahindra and Mahindra Ltd’s (M&M’s) stellar performance in the last couple of quarters, defying the general auto slowdown, has raised expectations on the Street. The stock has already rallied quite a bit after the results were announced a fortnight ago. Around half of the 58 brokerage firms on Bloomberg with M&M under coverage have recommended a “buy" on the stock with a price target above ₹ 800. A Bank of America-Merrill Lynch report released on Monday raised the price target for M&M from ₹ 825 to ₹ 880. This is based on a 4% per year revision in earnings forecast (for FY13 and FY14) and a higher imputed FY14 price-earnings multiple (13 times versus 12 times earlier) driven by strong business prospects. 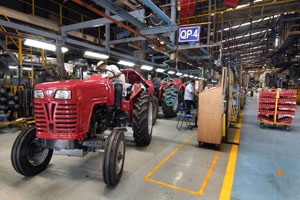 Optimism about the outlook for M&M hinges on the auto segment—it has been growing at a scorching pace of around 50% year-on-year in the last few quarters. Growth has been driven by its battery of utility vehicles—the company commands an unchallenged 65% share of the market. For the June quarter, M&M’s net sales (including those of Mahindra Vehicle Manufacturers Ltd) jumped 32% from the year-ago period, powered by a huge 49.3% growth in automotive sales, even as growth in the tractor segment simmered down to 7.7%. Moreover, average realization expanded by a robust 20% at a time when discounts are being doled out in the passenger segment to push sales.

Going forward, the waiting list for its newly launched XUV 500 vehicle and the consequent production ramp-up from 4,000 to 5,000 units per month, the series of launches planned and a steady increase in exports will rev up sales. More importantly, it will compensate for the cyclical downturn in tractors, which is expected to last until the first half of FY14. 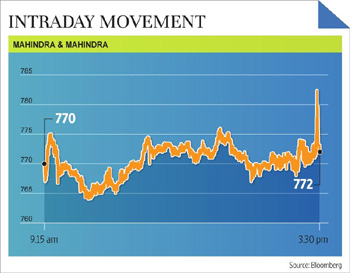 Analysts expect flat tractor sales during the current fiscal, but see 12-13% growth in automotive segment sales for the firm. Better realizations (20% for auto versus 8.8% for tractors in the June quarter) will help contain costs and profitability.

The only concern is whether M&M will maintain its margins. The company’s tractor and farm equipment segment enjoys significantly higher operating margins than the automotive segment. The auto segment comprises about 67% of the total sales at present, compared with 45-50% two years back. However, the management is confident of maintaining operating margin at the the current level—in the June quarter, it was 13.9%, marginally lower than the year-ago period.

According to Umesh Karne, an analyst at Brics Securities Ltd, “Strong volumes and capacity utilization along with better realization on sales, given its new product mix, going forward will provide upsides to the stock price from current levels."

Yet, strangely and perhaps due to concerns on the farm equipment segment, the stock has underperformed the benchmark BSE Sensex and auto index. Analysts expect the trend to reverse when tractor sales improve to bolster margins clocked by the automotive sector. One may see a re-rating, too, then. However, delayed recovery in tractor sales may eat into profit margins, which, in turn, could affect valuations.