Why cash is still king for Indian consumers

Universal acceptance makes cash the preferred choice. But most consumers use other modes as well

Payments related technological innovations are changing the way the Indian consumer pays for her spends. However, cash remains king. According to a Reserve Bank of India’s (RBI) report released in March, Concept Paper on Card Acceptance Infrastructure, usage of debit cards at ATMs still account for 88% of the total volume and around 94% of the total value of debit card transactions. Compared to this, transactions at point of sale (PoS) terminals account for only 12% of volume and 6% of value of transactions.

The concept paper also noted that although transactions have risen over the year, growth in acceptance infrastructure (ATMs and PoS machines) has not kept pace. Between October 2013 and October 2015, the number of ATMs increased by around 43% while PoS machines increased by 28%. As of December 2015, there were 0.19 million ATMs and 1.2 million PoS machines. “...rate of growth in setting up card acceptance infrastructure has also slowed down during these three years," said the note. 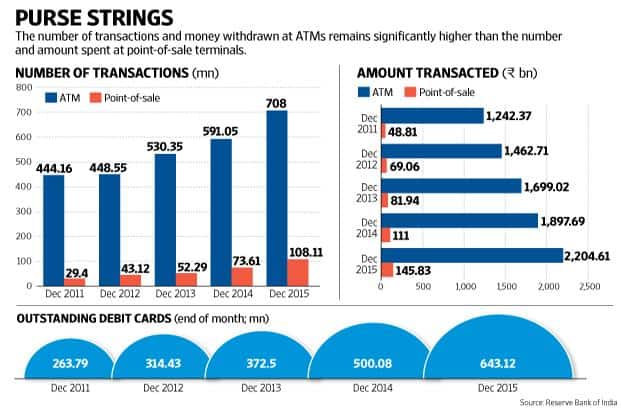 Why the low usage?

One of the reasons is that the growth in acceptance infrastructure has not been uniform across the country, with higher concentration of ATMs and PoS machines in urban areas and larger towns. “There is a lack of penetration of PoS machines. And even if there are machines installed, low-value transactions are discouraged by the merchants themselves. Then there are connectivity issues, which discourages consumers from using PoS terminals to make payments," said Piyush Singh, managing director (financial services group), Accenture India. For instance, many mom-and-pop shops and kirana stores refuse to accept digital or electronic payments and don’t have PoS terminals.

The central bank agrees with this reasoning. “The usage of cards has been constrained by lack of accessible acceptance infrastructure, especially in rural areas where the growth in card issuance has been very high in recent times," said the note.

“Customers still largely use debit cards for ATM withdrawals. But with increased issuance of cards, usage at PoS is gaining traction. Some of the challenges are on increasing the acceptance ecosystem, perceived risk and dispute management. Merchants that have PoS machines need to actively promote usage of cards over cash," said Sumit Bali, senior executive vice-president and head-personal assets, Kotak Mahindra Bank Ltd.

Arshiya Naina, a fashion designer who runs her own boutique in Kochi, said that a majority of her customers either transfer the money to her current account, or pay by cash or cheque. “The PoS machine in the shop in basically gathering dust," she said. Naina, however, prefers to use her cards as much as possible. “I withdraw money from the ATM three-four times a week. On an average, I take out 1,000-2,000. But whenever I go shopping, be it for clothes or for household needs, I swipe my debit card. For work related expenses, I mostly pay for the material I require by cash since these are low-value transactions and most merchants don’t accept card payments," she said.

According to a JM Financial report, Card penetration in India, number of PoS devices stands at 1.2 million for more than 14 million estimated merchants, which means that over 90% of the outlets are left without a medium to collect payments electronically. It also said that while almost every bank is a card issuer, few are engaged in merchant acquisition and setting up of acceptance infrastructure.

Maybe PoS terminals are not being used as much as ATMs, but more and more cards are being used for digital purchases. “E-commerce portals and digital wallets are increasing the electronic usage of money through debit and credit cards. We are seeing healthy growth in e-commerce spends, and digital wallets, too, are expanding the market," said Bali.

Though just 5% of transactions come through the digital channel, those like 29-year-old Naina are opening up to the idea. “Whenever I have to book movie or travel tickets, or do hotel bookings, mobile and DTH recharge, I pay digitally using my Paytm account," said Naina.

Although a majority of the payments are still being made by cash, frequency of usage at PoS terminals has increased. Gurgaon-based author Seema Chaudhry said that nowadays she uses her debit card wherever possible. “Only if the transaction is below 100 do I pay by cash, or if I’m buying, say, vegetables at a vendor. Besides, I find carrying money risky when travelling. So, I prefer carrying as little cash as possible. Another reason why I swipe my card while shopping is for the reward points," she said. Chaudhry, who is in her early 40s, said she withdraws money from an ATM about twice a month, when she takes out enough money for the month.

“Frequency of card usage has also improved over FY12-9M (months) to FY16 as the number of transactions per PoS terminal has grown for both credit and debit cards consistently," said the JM Financial report. In FY12, there were 328 million debit card transactions at PoS terminals, in FY14 this increased to 619 million, and in the first nine months of FY16 it has increased to 846 million.

Mobile banking, too, has seen a keen uptick in the past few months. According to RBI data, on a year-on-year basis, the amount transacted through mobile phones in December 2015 rose more than fourfold to 49,029 crore, from 11,323 crore a year before.

Banks, too, are introducing new-age payments options. “There is focus on increasing customer awareness of using cards beyond just cash withdrawals. Over a period of time, in addition to traditional usage, banks are working on contactless payments using near field communication, push payments on quick response or bar code scanning, and other such checkout solutions while transacting online. There is increased usage of merchants integrated through our mobile banking app," said Bali. (Read more about innovations in payments here: http://bit.ly/1nJSqcX).

RBI’s concept paper (http://mintne.ws/1SM4AfW) has also suggested a way to nudge banks to promote payments by cards. Besides mandating banks and rationalising charges, proposals include setting up a fund for investing in swipe machines.