If you have bought your home on a loan, you would by now understand that your equated monthly instalments (EMIs) are interest rate sensitive: that’s because most of you would be on a floating rate of interest. So your EMI reduces when the bank reduces the rates and increases when the bank tightens them.

Taking the idea from the lending to the borrowing side, IDBI Bank Ltd has introduced the concept in its fixed deposits. The bank has launched Floating Rate Interest on Retail Term Deposit or FRTD, where the interest rate will be floating and not fixed. The interest will be pegged to 364-day Treasury bills (T-bill). “The biggest drawback of a fixed deposit is that you lock yourself into a rate. So if interest rate moves up, you tend to lose out and the only option is to break your FD, incur a penalty and buy a fresh FD. By keeping the rate floating, this product takes care of such a problem," says R.K. Bansal, executive director, IDBI Bank.

If rates were to increase going forward, this term deposit will automatically give you more and if the rate goes down, your returns will also come down. A good concept, but it needs to be seen in light of the current market scenario. 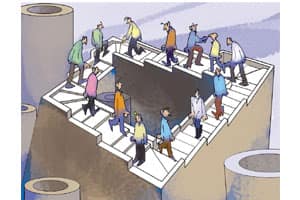 But going forward, interest rates are unlikely to move up. “We are definitely at the peak of the interest rate hike. Because of the slowdown in growth, the rates will not go up further but come down. However, keeping in mind inflation, we may not see a sharp fall in the interest rate either," explains D.K. Joshi, chief economist, Crisil Ltd.

In fact, RBI has already begun lowering policy rates. In April this year, the regulator lowered its repo rate, the rate at which the central bank lends to the commercial banks, for the first time since March 2010 by 50 basis points (bps) to 8%.

Given that the rates are unlikely to increase and may also go down, an FD is what you need, but possibly not the one that has a floating rate. Read on to know why FRTD does not excite the investor right now.

This term deposit has a lock-in of one year and is available for six tenors: one, two, three, five, seven and 10 years. The minimum contribution for this product is 10,000 and the maximum 1 crore. The rate of interest is pegged to the average yield of 364-day T-bill auctions during the preceding three months. The interest will be updated every quarter. But what will differentiate the rate of interest across various tenors is the positive spread that the bank offers. “Over and above the T-bill rate there will be a positive spread of 100-140 bps for terms ranging from one year to 10 years, respectively," adds Bansal.

You can move your FD to FRTD. In order to encourage you to do so, the bank has promised to waive off any penalty on an existing FD or term deposit with the bank. “The customer will enjoy the same rate of interest on his FD till such time he moves it to FRTD. Going forward the FRTD rate will apply. Also, he doesn’t have to pay any penalty as long as he stays in FRTD for the term that he had initially chosen," explains Bansal. So if you bought an FD for, say, five years and after two years you decide to move into FRTD, you will need to be in it for at least three years to enjoy the benefits mentioned above.

Additionally, FRTD has no penalty if you choose to move out of the product. But at the time of premature withdrawal, you will have to settle with a lower rate. So if you terminate a five-year FD in three years, the positive spread applicable on a three-year FD will apply.

This product is pitched as a tool to hedge against the rise in EMIs: an increase in EMI or liability will be followed by a subsequent increase in rate of interest on your investments or assets. A good concept, but bad timing given that the interest rate cycle has peaked.“T-bills are very sensitive and any interest rate move by the RBI gets reflected into the prices of the treasuries," explains Siddharth Shankar, director, KASSA, a Delhi-based financial services organisation.

The rate of interest on FDs is in the range of 8-9.40%. On the other hand, the average yield of 364-day T-bills in the last three months, from 1 April to 30 June, that the bank has taken for its interest rate calculation for FRTDs opened up to September 2012 is around 8.19%. Factoring in the positive spread, if you buy a one-year FRTD, you will get around 9.19% for the quarter; on a 10-year FRTD, you would get around 9.59%.

The 10-year product definitely appeals, but remember that as the rates go down, your rate of return will come down, too, and if you choose to withdraw your money mid-way, you will have to settle for a lower rate.

Locking into an FD in the current scenario makes more sense. “In today’s scenario, when the interest rates are high, it makes sense to lock in on fixed rates for FDs. Today, this product would not make sense as they will keep reducing the returns based on their benchmarks, which can be expected to progressively come down," says Suresh Sadagopan, a Mumbai-based financial planner.

Agrees Bansal, but emphasizes the need to understand this product. “In a rising rate scenario, banks won’t launch such a product, whereas in a falling interest rate scenario buyers will not come. This will happen, but what is important is to understand the product. This product is meant for individuals who wish to stay with the market," he says.

But financial advisers don’t agree. “In order to not suffer from the impact of interest rate volatility the FMP (fixed maturity product) is preferable," suggests Veer Sardesai, a Pune-based financial planner.

And it’s not the timing of the product alone that seems to be a sore point, but also the category of investors who invest in FDs. “Most individuals use an FD to get an assured income. To be able to give an assured rate of interest, the bank has to take a calculated risk of how rates will move during the FD period. By moving to a floating rate FD, the bank is better off, since it no longer has to take this risk. However, for an individual, who uses FDs as a safe investment product to park funds, this may not be a good idea," says Sardesai.

The product is good and is here to stay. While Mint Money doesn’t recommend the product immediately, we will remind you when the rates are set to move up again.