The government’s reform push is not translating into a pick-up in investments at the ground level, at least not yet. New project announcements continued to slide in the September quarter as net project announcements fell 33% year-on-year (y-o-y) compared with a 42% y-o-y fall during the same period last fiscal, according to Espirito Santo Investment Bank research. In fact, new project announcements on a past four-quarter basis have decelerated at a slightly faster clip, down 32% y-o-y so far in this fiscal year against an average of 30% decline in the preceding one.

The deceleration in project announcements is in line with the fall seen in loans sanctioned by banks for new projects. In the year to March, hardly any capital expenditure was sanctioned by banks, after it plunged to ₹ 2.2 trillion in 2011-12 from almost ₹ 4 trillion the preceding year, according to Kotak Institutional Equities Research. The weakness in fresh investments was seen across all the segments, with investment falling 55% and 43% y-o-y for power and infrastructure segments, respectively in the September quarter. It was also down 17% for process industries, followed by a 7% dip in the refinery segment. The main reason for the rise in shelved and stalled projects in the power and infrastructure sectors was the lack of assured coal supply and funding constraints. Capacity addition was also down 11%, below the planned target in the first half of this fiscal. 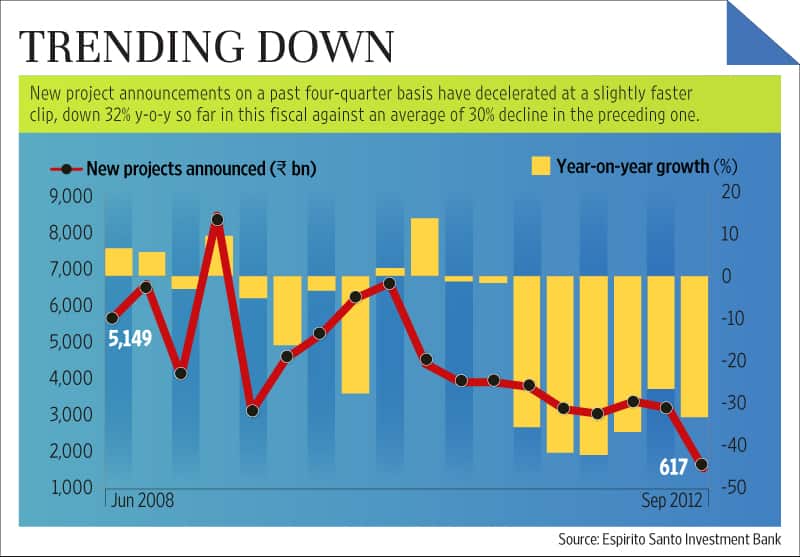 Clearly, the concerns that have crippled the infrastructure sector need to be addressed, such as issues with land acquisition, environment clearance and fuel scarcity. The institutional framework for project announcements also needs to be less cumbersome, especially in awarding of natural resources such as airwaves and coal, said analysts. While the Reserve Bank of India went ahead with a 50 basis points repo cut in April, it was not enough to accelerate investments. One basis point is 0.01%.

To make matters worse, the dysfunctional Parliament will further delay investment revival because there are Bills that need legislative approvals, such as the proposed land acquisition and minerals and mining laws.

Is there any silver lining? The only saving grace is the formation of National Investment Board, since it does not require parliamentary approval, said Krishnakant Thakur, an analyst from Espirito Santo Securities.

As finance minister P. Chidambaram said on Saturday, the government may set up the board soon, which will be a single-window, clearance agency for all projects that cost over 1,000 crore. Projects will be given priority and monitored on fast-track basis. But again, we need to see how much power the board is given.