Thanks for Visiting Mint
You seem to have an Ad Blocker on. Please turn it off in order to continue, or whitelist Mint
HOW TO TURN OFF AD BLOCKER
OR
REFRESH IF YOU ALREADY TURNED OFF THE AD BLOCKER
Home >Money >Calculators >Can Indians shift away from physical assets?

Can Indians shift away from physical assets?

There is a traditional bias towards select physical assets, such as gold and real estate but with the fall in their prices for some time, investors may move to other assets

The latest Credit Suisse Global Wealth Report 2016, confirmed what we already knew—Indians prefer real or physical assets, compared to financial assets. Domestic data shows that bulk of this is in gold and real estate. What’s noticeable is the clear difference in how the developed market invests versus the emerging markets.

For example, in the US, financial assets account for around 72% of total wealth. The figure stands at around 53% for Japan and around 51% for the UK. In contrast, if you consider some of the emerging markets other than India, Russia has slightly over 10% of its wealth in financial assets, Indonesia around 14% and Brazil is at 36%.

There is a traditional bias towards select physical assets, dictated by historical experience. “Historically, returns from property and gold have mostly been positive.

It’s only in the last 5-6 years that investors are losing money. At the same time, the development of financial markets in India is a fairly recent phenomenon.

Before dematerialisation, there wasn’t enough transparency and awareness among investors to trust the stock and bond markets," said Prateek Pant, head-products and solutions, Sanctum Wealth Management.

India is the largest consumer of gold and there is a preference for holding land as well. Moreover, many regions in India have seen a disproportionate rise in property prices over the last two decades.

“The disproportionate ownership in real assets is cultural to an extent. Traditional Indian households prefer ownership of the house over a lease, which tends to drive investment in real estate. The sharp rise in prices has meant that for many the value of the real asset, like your house, is higher than the value of financial assets held," said Toral Munshi, head-India equity research, Credit Suisse Wealth Management (India).

“Volatility in financial assets and capital markets has increased across the globe. At the same time, wealth creation itself has slowed down," said Munshi. This may indicate a shift to capital preservation from capital growth. 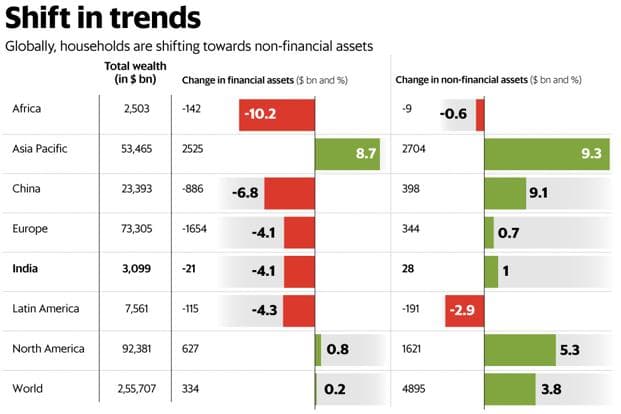 As economic development progresses in India, will there be a shift towards financial assets?

“The shift away from real assets is likely to be gradual as it’s about a change in traditional biases as well. Demonetisation could be one step that can aid a move into financial assets. Moreover, new regulations in the real estate sector can also drive this shift," said Munshi.

Demonetisation of Rs500 and Rs1,000 currency has led to a surge in cash deposits in bank accounts but some of this cash may come into financial products as well. Moreover, for some time now property prices, especially of residential properties in India, have been trending lower. Gold prices, too, have shown a 6.5% decline over the past 5 years. Hence, there is little room to hide in real assets at present.

“Traditionally, savers in India relied on fixed return products offered by the government. However, as pension and long-term wealth creation moves towards market-linked products like mutual funds and NPS (National Pension System), we are witnessing a transition towards financial assets," said Pant.

The global wealth growth has slowed down considerably. In 2016, global wealth grew 1.4%, in line with the slow growth rates since 2014, but this was much lower than 2009-14 period. So, investments in risk capital might happen at a slower pace. A large part of financial assets are in risk assets like equities and commodities.

The volatility in financial assets could be one of the reasons for a shift in the global trend. But in India, given the low penetration of financial assets at 14% of household wealth, the shift away from real assets is a more likely trend. The other dynamic in the Indian context is the unequal distribution of wealth.

The report says 96% of the adult population has wealth below $10,000. The inequality itself will limit the shift to some financial assets.

“Many investors who come to us have already bought a property; even if it is on loan or very far from where they live. It’s like ticking a box, has to be done," said Surya Bhatia, a Delhi-based financial planner. He added that people are sensitive about a negative return in equity mutual funds but don’t feel bad when gold exchange-traded funds (ETFs) show a similar negative outcome. But there is a slight change in attitude over the last 6-9 months, as both property and gold are seeing a prolonged fall in prices, plus property has become more illiquid, said Bhatia.

As the Indian economy becomes more digital, some shift towards financial assets may happen. However, for a larger push, individual mindset and traditional biases need to get altered, which is likely to be a gradual process.