But with raw material costs for other forms of fertilizers remaining elevated, companies may see limited improvement in earnings in FY19

The fall in gas prices and the prospect of abundant supplies this year will bring only partial relief to fertilizer producers. Subdued demand is weighing on sales. With raw material costs for other forms of fertilizers, notably phosphatic and potassic (P&K) fertilizers, remaining elevated, companies may see limited improvement in earnings in the current fiscal year.

Natural gas is the key raw material for producing urea, constituting 70% of the production cost. Strong demand from China drove up prices in 2017 and much of 2018, driving up the production cost of local urea manufacturers. This had raised working capital borrowings, impacting the profitability of urea manufacturers, points out ratings firm Icra Ltd. 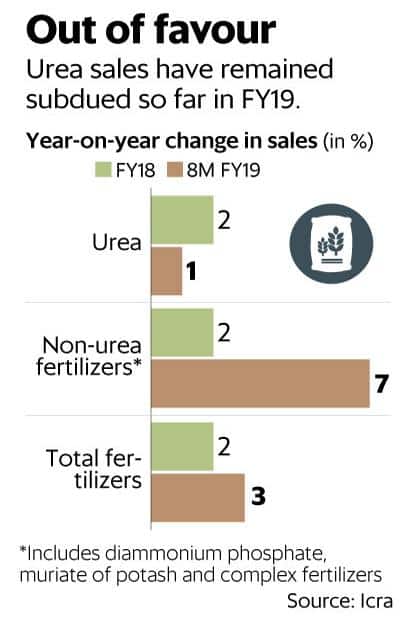 As 2018 drew to a close, gas prices began to ease. With supplies rising, consulting firm Wood Mackenzie Pvt. Ltd estimates prices to remain soft in 2019. “Asian LNG demand growth will not keep pace with LNG supply and Europe, northwest Europe in particular, will have to absorb the surplus, especially during the summer," Wood Mackenzie said in a note.

LNG is liquefied natural gas and mmbtu is one million British thermal units, a measure of the energy content in fuel.

Soft gas prices will ease liquidity pressures and make urea production remunerative. But these benefits are being undermined by subdued demand and high raw material costs for non-urea, or P&K fertilizers. Total fertilizer sales in the first eight months of the current fiscal year were up just 3%. Urea sales increased a mere 1%, compared to 2% rise in the previous fiscal year, reflecting muted demand.

However, as Icra points out, the input cost-led rise in retail prices weighed on demand. To clear inventories in some regions, companies offered discounts, which hit realizations. “Additionally, a lag in passing on the price increase has also resulted in negative impact on the profitability of these players," added the ratings firm. With prices of key raw materials remaining high, profitability of P&K fertilizer producers is expected to remain under pressure in the current fiscal year.

The concerns were weighing on the shares of fertilizer companies. Coromandel International Ltd, a large fertilizer producer, lost one-fifth of its value in the last one year. While revival in the near-term looks unlikely, much depends on the government’s subsidy allocation for fertilizers in the forthcoming budget, and a revival in demand.