Consumers are now preferring to buy ready-to-move-in properties as against under-construction ones due to lack of confidence in developers to deliver projects on time, according to the PropIndex report by real estate portal Magicbricks.com.

Consumers with purchase potential are hesitant to buy under-construction properties as project delays lead to consumers having to bear the additional financial burden of paying rent over and above home loan instalments. In the current market scenario, consumers are opting for ready-to-move-in properties and are willing to pay a premium as the delivery risk is low. 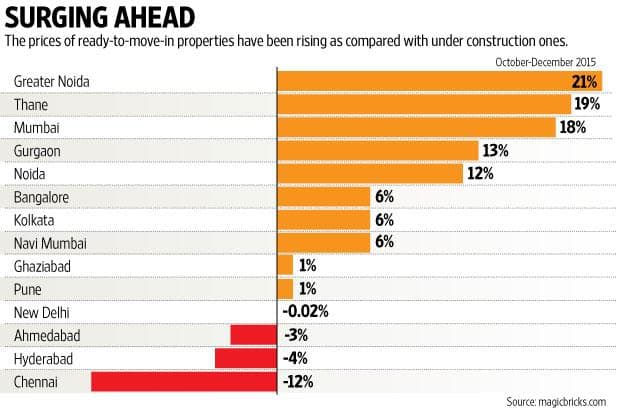 At city level, the premium for completed properties varies from 21% in Greater Noida to -12% in Chennai. The negative premium means that under-construction properties are at a premium to ready properties.

In case of Mumbai, overall the debate over the two types of properties is impacted by the fact that ready-to-move-in properties may be more favourably located. This affects the premium aspect more than the consumer preference for ready-to-move-in properties. This holds true especially for the western sub-urban localities and those further north. But in localities with relatively large development activity, such as Virar, Vasai and Mira-Bhayandar, the ready properties are at a premium over under-construction properties.

In case of Delhi, the trend reverses as under-construction properties have seen a decline in prices with the exit of investors from the market.

In other cities with large scale development activity, the distinction in prices is mainly due to a consumer’s aversion to take development risk.

In a developing market like India, under-construction properties are likely to command a premium over ready-to-move-in properties. This is because a consumer or investor can enter a project at different stages of construction, it has lower entry cost and gives flexibility to book profit and exit an investment. But these advantages are nullified in a slow market, where investors have exited the market and end-users are wary of putting money in under-construction projects for which delivery time-line is not certain. This aspect is reflected in the price increment of these two types of residential assets.

It makes business sense for developers to have a good project delivery track record and be more transparent in dealing with consumers. Unless consumers see a sincerity on the part of developers to deliver the project on time, they are unlikely to opt for such projects.