Bangalore: Venture capital (VC) and private equity (PE) funds are set to build on the momentum generated by $2 billion (Rs8,880 crore) investment in the March quarter, invoking memories of the euphoria that prevailed before the global credit crunch took hold in September 2008 after the collapse of Wall Street investment bank Lehman Brothers Holdings Inc. 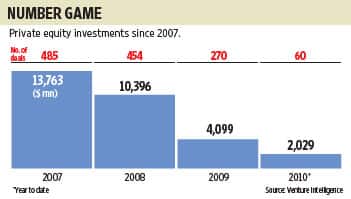 Big-ticket deals are set to dominate VC and PE transactions in the next three quarters, according to investment bankers. “There is a possibility of 2007-08 euphoria getting back," says Sandeep Singhal, managing partner at VC firm Nexus India Capital Advisors Pvt. Ltd, who links the expected upturn to positive economic factors. “If we do not see any huge negative global financial shocks and the monsoon is good, 2007 could be back both in terms of enthusiasm and deals."

In January-March, VC and PE investment in India touched $2 billion, the highest in six quarters, according to a report by deal tracking firm Venture Intelligence. Mergers and acquisition transactions increased 76% year-on-year to 134 deals. The median deal value in the quarter was $25 million, compared with $10 million a year ago in the aftermath of the credit crunch.

The VC and PE investment space in the country saw 36 deals worth $526 million during the January-March quarter last year, down from $3.9 billion invested across 133 deals in the corresponding quarter of 2008, according to data compiled by Venture Intelligence.

In the quarter gone by, funds not only invested bigger amounts, they also backed new kinds of companies, venturing beyond traditional favourites such as information technology start-ups. Sequoia Capital, for instance, invested Rs50 crore in Stovekraft Pvt. Ltd, which manufactures kitchen appliances and modular kitchens. iCreate Software Pvt. Ltd, a business intelligence firm focused on banking, raised Rs15 crore from IDG Ventures India in its first round of fund-raising.

According to investors, sectors that will attract investment in the next nine months include healthcare, financial services, semiconductor testing, media and entertainment, power generation, ancillaries and logistics. Investors who were waiting on the fringes have started investing and struck their first deals in recent months. These include Summit Partners, Bain Capital Advisors (India) Pvt. Ltd and Quadrangle Capital Partners.

India’s domestic demand story is very strong, says Akhil Gupta, chairman and managing director at the Indian unit of Blackstone Group Lp, which recently invested in the holding company of newspaper publisher Jagran Prakashan Ltd. Blackstone is actively scouting buyout deals, Gupta says. “Out of the several deals that we are evaluating—one is a buyout," he says, without giving more details. Out of the 10 deals done by Blackstone in India, three have been buyouts.

Investment bankers expect the average deal size to expand this year. “We will see larger-sized deals," says Bhavesh Shah, executive director of investment banking at JM Financial Consultants Pvt Ltd. Interest level is high, with investors scouting for deals and many deal discussions are in an advanced stage, he says.

Some investors are staying cautious. Chasing deals doesn’t make sense when there is an excessive influx of capital, says Harshal J. Shah, chief executive of Reliance Venture Asset Management, adding that valuations tend to go up unreasonably. The firm has invested in two firms this year and is looking at investing in three more. “The bigger fear is that we might get too excited too soon. There are several companies planning to go public with revenues of $15 million. This is insanity," says Ashish Gupta, managing director of Helion Venture Partners. “I have a fear the euphoria is returning too fast."

A silver lining is that the market may see the return of early stage deals over the next nine months, providing start-ups with capital that was elusive during the downturn last year. “Start-ups are the casualty of a downturn as appetite for early stage investments goes down considerably. It will pick up now," says Gupta of Helion.