Household savings are finally shifting from physical to financial assets

The long-awaited shift of household savings from physical to financial assets is finally happening.

One lament among economic commentators was the average Indian household’s tendency to funnel its savings into physical assets—gold and real estate. Physical assets accounted for more than two-thirds of household savings in 2012-13 (the last year for which data is available), up from 48% five years earlier. It was widely believed that high inflation was the reason for households turning away from financial assets. 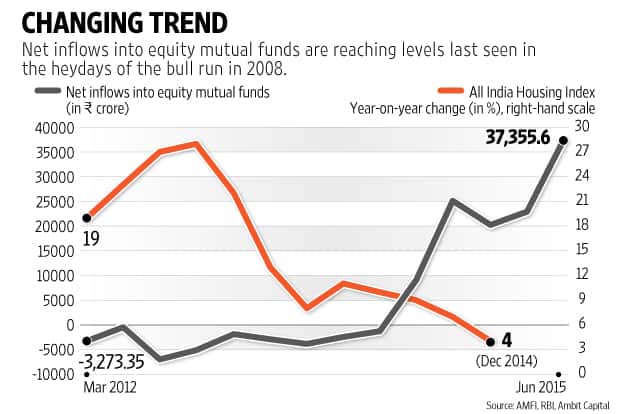 The reasons for this shift are apparent. Property prices are finally cooling off. Prices are correcting across cities while there has been a decrease in the number of property transactions and new launch volumes.

According to Ambit Capital, this slowdown is being driven by a mix of factors such as banks pulling back on lending to developers, huge unsold inventory and a draconian black money bill that has struck fear among speculators. Rental yields in India are also extremely low.

The other perennial favourite, gold, is facing its own set of problems. Gold prices tumbled to a five-year low earlier this week. Investors and jewellery buyers fear that prices haven’t bottomed out because of the forthcoming interest rate hike by the US.

In the near term, there is unlikely to be much support for gold prices because of rural distress and a slowing economy in China. A report by the World Gold Council said total demand for gold coins and bars during the January-March 2015 quarter contracted at 6% year-on-year. It said gold investment demand is down to a six-year low and “positive returns generated by domestic equity markets proved an attractive alternative to gold’s investment appeal, particularly at a time when there were no obvious catalysts to give the gold price clear direction".

This nascent shift to financial savings isn’t visible in equities alone. Take, for instance, bank term deposits. In this fiscal year so far, banks have collected ₹ 2.65 trillion in term deposits, up 55% over the same period a year ago. This return to term deposits is owing to a fall in inflation and the central bank’s unwillingness to cut interest rates by much: savers are enjoying positive real yields on their deposits after a long time.

As long as financial assets continue to hold the promise of higher yields, savers would move away from physical assets. That is extremely positive for the markets, as domestic inflows into mutual funds would support equity prices at a time when foreign inflows are likely to dwindle due to concerns about the US Federal Reserve raising rates.