No Modi wave, but a Fragile Five rally in equity markets

If the Indian stock market is doing worse than its peers, where is the Modi wave in the markets?

Is there a Modi wave in Brazil and Turkey as well?

After all, the MSCI Brazil and MSCI Turkey equity indices have risen by around 20% each in the past few months, far more than the rise in MSCI India, which is up a mere 0.7% (see chart).

In fact, the MSCI indices of all the other so-called Fragile Five economies—Brazil, Turkey, Indonesia and South Africa—have beaten India in the last two months. Not only that, India is also the worst performing market among these economies on a year-to-date basis. 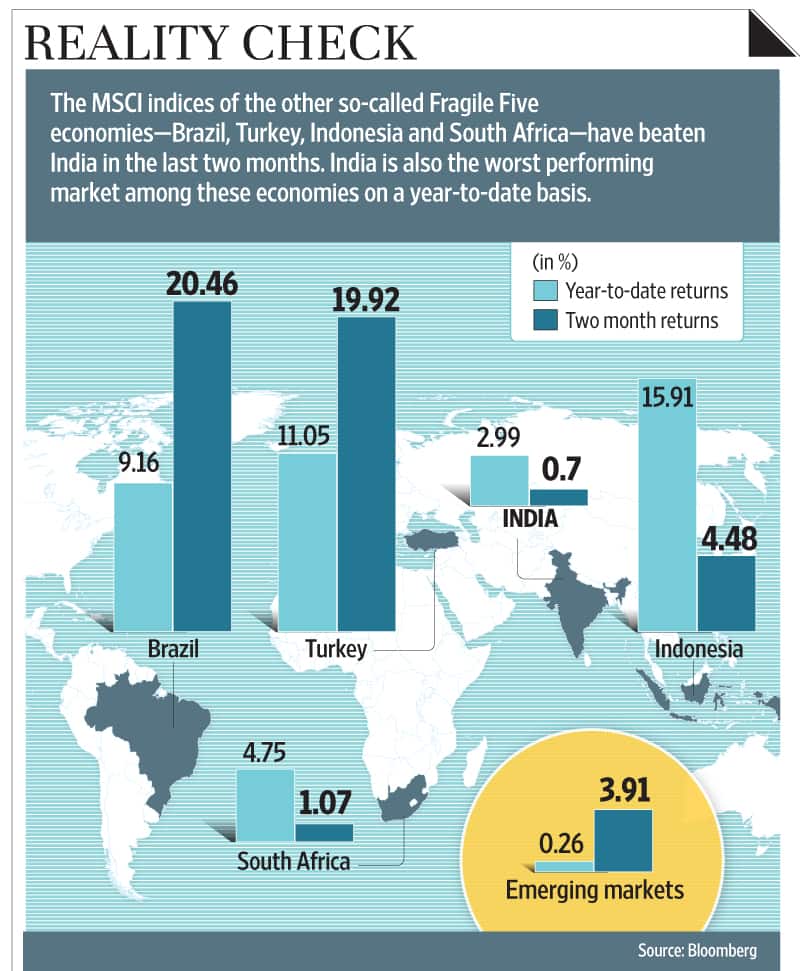 Sure, MSCI India is still beating MSCI Emerging Markets index since the beginning of 2014, but then we need to compare India with its peers, which, at least in the minds of investors, are the other members of the Fragile Five. Investors will recall that it was these emerging markets with large current account deficits that were battered badly last year when the currency crisis was at its peak. What’s more, MSCI India has performed worse than MSCI Emerging Markets over the past two months.

Since their meltdown last summer, all the Fragile Five economies have taken measures to improve their current account deficits and their economies and that seems to be bearing fruit, not only in their equity markets but in their currencies as well. In the last two months, the currencies of Brazil, Turkey and South Africa have done well compared with the dollar. The rupee too has appreciated but not as much as the currencies of the above three countries. All of them seem rather non-fragile at the moment.

If the Indian stock market is doing worse than its peers, where is the Modi wave in the markets? It is foreign institutional investors that have been net buyers in the Indian markets, while domestic institutions continue to see outflows and are net sellers. Surely, a Modi rally should see domestic participation as well?

It is possible that while investors welcome a Modi government, they are not sure about the results of the election and have cautiously taken some bets off the table. Or perhaps they feel even if the Bharatiya Janata Party (BJP) wins, the economic recovery will be slow.

There is, though, a silver lining.

The fact that there has been little impact of a Modi wave leaves the door open for a sharp rally in case the BJP-led National Democratic Alliance forms the next government.