Lower oil prices and the fiscal pain for oil producers

The price of Brent crude has already fallen by 15.6% to $31.5 per barrel in 2016, making a nightmarish backdrop for oil producing nations

The New Year has brought no respite from falling oil prices. The price of Brent crude has already fallen by 15.6% to $31.5 per barrel in 2016. This makes a nightmarish backdrop for oil producing nations, whose economies had flourished during the boom oil years. Falling oil prices are a threat to their oil assets.

How bad is it? The chart alongside shows the fiscal break-even oil price, the level at which the government budget is balanced, is higher than the current oil price for all the countries in the analysis, with Qatar being the lowest at $59 per barrel. The measure for Libya and Yemen is as high as $142 a barrel and $163 per barrel, respectively.

According to Ravindra Rao, head (commodity research and advisory) at Anand Rathi Commodities Ltd, since most of the Organization of the Petroleum Exporting Countries (Opec) derive about 90% of their revenues from oil, such a sharp drop in oil prices is alarming, despite the fact that their cost of production is far lower. “Sure, there is cushion in terms of foreign exchange reserves from a medium-term perspective but this cushion varies for every country and that determines the extent of trouble falling oil prices pose for each country," says Rao. 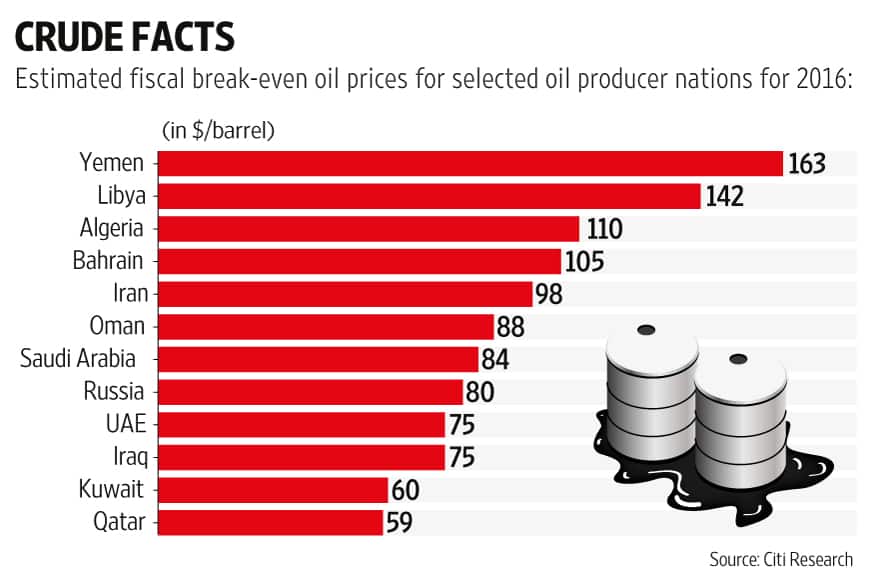 Needless to say, this problem is likely to worsen if oil prices persist low for long. Unfortunately, the outlook on oil prices is bearish, with the predictions getting louder about prices dropping to as low as $20 per barrel with each passing day.

Should India, being a huge oil importer, rejoice then? It does benefit from a lower crude oil bill, but this comes with some caveats in 2016. As Dharmakirti Joshi, Crisil Ltd’s chief economist, says some additional benefit to India’s fiscal position may come in 2016 if the current trend in oil prices continues, but the proportion of gains will be much smaller than 2015, as the drop in prices is likely to be low in absolute terms. Moreover, weaker economic conditions in oil producing countries may affect remittances to India, and there are concerns on exports to oil producers too, points Joshi.

“Fiscal stress in oil exporting countries caused by lower prices has already likely resulted in capital outflows from India and could accelerate and could also dent remittances (3-3.5% of GDP)," wrote analysts from Jefferies in a report on 12 January.

As this column had highlighted earlier, it is unlikely that benefits from the drop in crude oil prices will provide the same boost to the economy in 2016 as it did in 2015.