Slow off the blocks, but online trade in India poised to grow fast

Slow off the blocks, but online trade in India poised to grow fast

New Delhi/Mumbai: While Indian markets lag those in many emerging and developed countries in online trade volume, some share brokers expect buying and selling shares through the Internet to account for up to half of the total equity trade volumes in coming years.

Currently, online trade volumes in India is just about 20% of total trades. 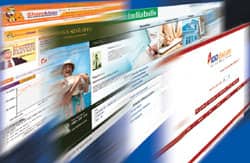 Screen shots of some popular online trading websites such as Sharekhan.com, Icicidirect.com and Indiabulls.com

However, online volume has suffered a dent because of recent market volatility and negative market sentiment, Kalyanaraman concedes.

Sharekhan derives 60% of its brokerage revenue from online trading. In 2003, online trading accounted for just about 10% of total volume in Indian stock markets. While there were only 10-15 brokers empanelled for Internet trading with the exchange then, now there are around 300 brokers wooing Internet-savvy investors.

Overall investing, too, remains at a very early stage in the country, according to a recent study by global accounting and consulting firm Ernst and Young, which said that only 4% of India’s domestic household savings or just about 13% of its gross domestic product is being channelled to shares and debentures issued by companies.

“Online investing is still at a nascent stage in India," said Sudip Bandyopadhyay, chief executive of Reliance Money Ltd, the country’s largest retail brokerage and a unit of Reliance Anil Dhirubhai Ambani Group. Bandyopadhyay expects the Internet-based trading to eventually take about half of the total stock market trading, in line with developed markets such as the US.

The highest online trade volume among emerging markets is in the Philippines, where about 55-60% of trades is executed online; analysts say the reason for greater acceptance of online investing in places such as the Philippines and Taiwan is because they had wider Internet connectivity years before India.

“Now they can make online trade any time, any where on real-time basis."