Higher debt due to expansion may weigh on JSW Steel shares

JSW Steel is taking several steps to rein in cost, and i nQ1 FY19, the company expects costs to be lower, as coking coal prices have tapered

The JSW Steel Ltd shares was under pressure on Thursday, a day after its Q4 results were announced.

Record production of crude steel and saleable steel during the quarter along with sharp increase in earnings before interest, tax, depreciation and amortization (Ebitda)/tonne, were some of the key highlights of the Q4 FY18 results. 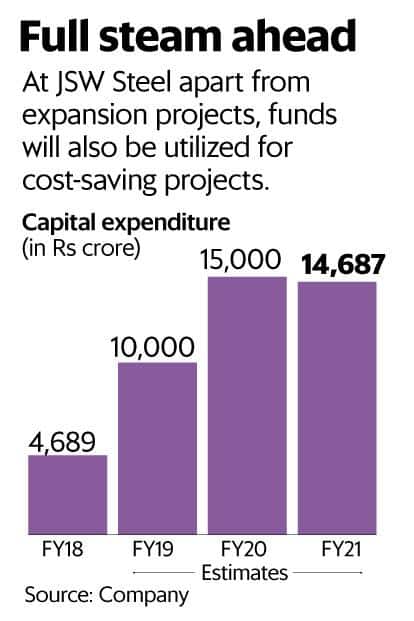 Did costs play a spoilsport? A bit of a dampener came from the sequential increase in total cost on a per tonne basis, which was impacted by elevated coking coal prices. Coking coal costs during the quarter increased to $205/tonne from $173/tonne in the December quarter, the management said in a post- earnings conference call.

But the company is taking several steps to rein in costs. These include commissioning of an eight-million-tonne per annum (mtpa) pellet plant, a coke oven plant of 3 mtpa and a waste heat recovery boiler of 175 MW. In the June quarter of the current fiscal year (FY19), the company expects costs to be lower, as coking coal prices have tapered since.

Further, three iron ore mines with volumes of 4 mtpa are expected to start operations by the second half of FY19. They would aid in cost savings in Karnataka by reducing imports and also purchases from Odisha mines. However, the benefits of these cost- reduction measures would take some time to reflect in the JSW Steel’s balance sheet.

Meanwhile, the demand outlook is strong. The management expects steel demand to grow by 7-7.5% year-on-year in FY19 and has guided for steel volumes of 16 MT in FY19 and crude steel production of 16.75 mt.

Why then, in spite of all these positives, are investors skittish about the stock? The answer probably lies in its expansion plans. JSW Steel has approved new projects to augment steel-making capacity to 24.7 mtpa in 2020 from its current 18 mtpa.

The company’s net FY18 debt/Ebitda ratio—a measure of leverage—stood at 2.57 times, said the management. That is lower than the 3.5 times it was some quarters ago, but the capex plans would stretch the balance sheet and consequently its net debt/Ebitda would surge, caution analysts.

In short, while JSW Steel may perform well operationally, higher debt on the back of increased capex is likely to weigh on the stock’s near-term performance.