Thanks for Visiting Mint
You seem to have an Ad Blocker on. Please turn it off in order to continue, or whitelist Mint
HOW TO TURN OFF AD BLOCKER
OR
REFRESH IF YOU ALREADY TURNED OFF THE AD BLOCKER
Home >Opinion >Online-views >Rupee at six-week high on reforms hope

Mumbai: The rupee on Tuesday rebounded sharply to a one-and-a-half-month high, bolstered by improving sentiment among foreign investors about critical reforms taking in Asia’s third largest economy and expectations that central banks across major economies will soon begin cutting rates to prop up growth.

Besides these factors, some of the foreign investors unwinding their exposure in non-deliverable forward (NDF) contracts too supported the partially convertible rupee to return from its recent troughs, traders said.

NDF is an offshore foreign currency financial derivative instrument, in which there is no physical settlement of two currencies at maturity. The counterparties settle the difference between the contracted NDF price and the prevailing spot price on an agreed notional amount. 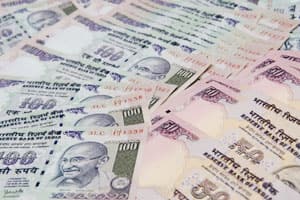 The currency, which tested its lifetime low of 57.15 on 22 June, has risen 5.12% since but has lost 2.4% from the beginning of this year, according to Bloomberg data.

From the beginning of this year, foreign institutional investors (FIIs) have been net buyers of Indian equities to the tune of $8.52 billion (Rs 46,689 crore). On Tuesday, FIIs bought $108.5 million worth of shares, net of selling, provisional data from National Stock Exchange of India Ltd (NSE) showed.

The rupee strengthened for the the fourth day in a row on Tuesday, the longest winning streak since February.

Traders are optimistic that the Indian currency is out of the woods and the rise can be sustained if global and domestic factors remain favourable.

“There were overseas investors unwinding their NDF positions, which evidently supported the rupee. Though the global scenario has not changed, there are big expectations among investors that central banks will slash rates," said Naveen Raghuvanshi, vice-president, foreign exchange,at Development Credit Bank Ltd.

According to Raghuvanshi, the rupee rally is expected to continue and “should see the rupee at 54.20 per dollar in one or two days." Investors, however, expect the currency to trade at 55.61 a dollar as indicated in the three-month NDF contract.

Data released on Monday showed US manufacturing shrank for the first time since July 2009, boosting speculation that the Federal Reserve will act.

The European Central Bank will cut its benchmark interest rate at a 5 July meeting, according to 51 of 62 forecasts in a Bloomberg survey.

To arrest the rupee’s depreciation, the Reserve Bank of India (RBI) and the Indian government have taken several measures in the recent past, including curbing banks’ ability to speculate in the currency market besides selling at least $20 billion to support the home currency.

For its part, the government last week increased the overseas investment limit in government debt by $5 billion to $20 billion.

Portfolio investors too have turned bullish after the Indian government released draft rules last week and said the general anti-avoidance rules, or GAAR, would not apply retroactively, a big concern for such investors.

Adding to the optimism on rupee revival, rating agency Crisil Ltd, the Indian arm of Standard and Poor’s, on Monday said there was high probability of the rupee touching 50 per dollar by March 2013. It assigned a one-third chance for the currency consolidating around 55-57 level if market conditions are adverse.

There are expectations that economic reforms will be pushed after Prime Minister Manmohan Singh has taken over the finance portfolio, traders said. “There is a clear optimism that reforms will be pushed and more positive news will come from the government. These improving sentiments are supporting the rupee," said J. Moses Harding, executive vice-president and head (global markets group) at IndusInd Bank Ltd.

Bloomberg and Reuters contributed to this story.