Asia accounts for around half of India's total exports so far in 2015-16, which is more than the combined share of Europe and the US

India’s export growth has been contracting, given the slowdown in the global economy. Exports have fallen around 17.6% since the beginning of fiscal 2016 after declining marginally in fiscal 2015.

What is worrying is that exports to Asia are also declining. In the past few years, India diversified its exports towards the Asian markets, especially after the financial crisis hit North America 2008-09.

Asia accounts for around half of India’s total exports so far in 2015-16, which is more than the combined share of Europe and the US at 31.8%. 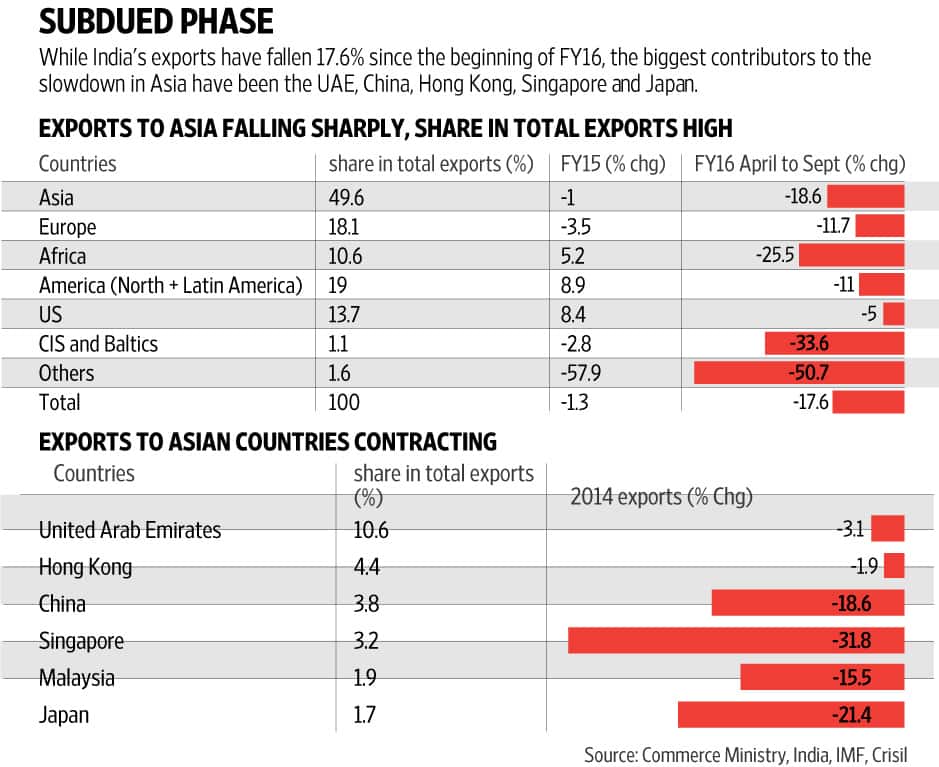 Asia is leading the fall in export growth following Africa in FY16, down 19%, compared with a marginal decline seen in the previous fiscal year, according to data compiled by Crisil Research.

Slowing exports to Asia are a reflection of lower commodity prices and feeble demand for goods in China. “Commodity price corrections reflect subdued demand globally, particularly in China. China’s exports have taken a significant hit and the Asian markets, which are directly or indirectly linked to China, have seen a demand slowdown. The softening growth rates have meant lower imports, which, in turn, have affected the exports of Indian products to the Asian markets," said Rakesh Valecha, senior director and head of corporate ratings from India Ratings and Research Pvt. Ltd.

The biggest contributors to the slowdown in India’s exports have been the UAE, China, Hong Kong, Singapore and Japan—most of these countries have seen exports contract in the double digits. The waning exports may actually derail the recovery process. With exports getting affected, coupled with the improving but still subdued domestic demand, capacity utilization levels for key sectors will take time to improve, which, in turn, will delay the process of recovery for Indian companies, according to Valecha.

Smaller companies that have a problem of liquidity and leverage may take a bigger hit from slowing Asian exports.

The contribution of MSMEs (micro, small and medium enterprises) to Indian exports has been growing—their share of the total exports increased to 44.7% in FY15 from 43% in FY13, according to Crisil Research.

This means that although there will be a modest improvement in domestic demand, the credit profile of companies is unlikely to change materially. As a result of the deflationary impact of the lower commodity prices, nominal income growth of companies in most of the exporting sectors is likely to remain depressed.

Additionally, any adverse impact of an expected interest rate hike in the US on trade partner economies also remains a risk, according to India Ratings and Research in a note dated 9 November.