Telenor’s painful exit and the writing on the wall

If Telenor's exit from the Indian markets is any indication, the remaining small and mid-sized telecom companies would do well to take what they get and exit while they can

Telenor ASA has handed its India business over on a silver platter to Bharti Airtel Ltd. Leave alone receiving any value for its equity, Telenor will also service the outstanding debt of its Indian subsidiary before the handover.

Evidently, the company wants to cut losses and run. But in the process, Bharti Airtel gets spectrum worth Rs5,000 crore based on last year’s auction prices, by only making a payment of around Rs1,600 crore to the government.

As consolidation has picked up pace, one thing is becoming increasingly clear—sellers are settling for lower and lower valuations. Telenor even settled for nothing, despite having 44 million customers and nearly Rs5,000 crore in annual revenues; leave alone the value of its spectrum.

Remaining small- and mid-sized companies such as Reliance Communications Ltd (RCom), Aircel Ltd and Tata Teleservices Ltd should take note of the writing on the wall. 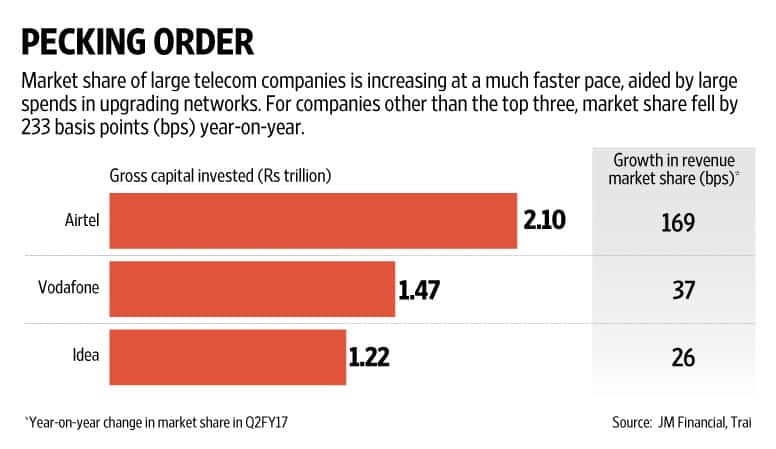 Last year, when Videocon Telecommunications Ltd sold its spectrum assets, it got a considerably lower valuation than it had earlier envisaged. When Idea Cellular Ltd backed out of a generously priced deal, Airtel stepped in at lower valuations. But even then, Videocon managed to get around 1.4 times the value of the spectrum, based on recommended prices for an upcoming auction.

Of course, since then, large companies filled many of their spectrum portfolio gaps in the auction. And spectrum ceases to be the scarce asset it once used to be.

In addition, the massive reduction in tariffs after Reliance Jio Infocomm Ltd’s launch last year has made things increasingly difficult for mid-sized companies such as RCom and Tata Teleservices. Each of them has huge debt and lacks the resources to compete in an environment where heavy capex is the order of the day. With Jio setting the pace with new tariff structures, these smaller companies no longer pose the competitive threat they once used to.

News reports suggest they are in talks to combine operations to stand their ground against Airtel, Jio and the proposed Vodafone-Idea combine.

Coming together may help display scale for a possible suitor, but the monumental debt on their books may more than offset any buying interest that emerges. Besides, even if they manage to overcome debt and other hurdles and combine operations, they will together have a revenue market share of around 18%.

Consider that both Idea and Vodafone India Ltd individually have a higher market share (of 19% and 23.5%, respectively), but are still discussing a merger to effectively take on the might of Jio and Airtel.

If Telenor’s painful exit from the Indian markets is any indication, the remaining small and mid-sized telecom companies would do well to take what they get and exit while they can.