Kansai Nerolac's operating profit margin fell to 14.1% in the December quarter, from a high of 15.8% in the September quarter

Shares of Kansai Nerolac Paints Ltd touched an all-time high earlier this month but have since then fallen by 8% owing to concerns about rich valuations and the possibility that the company’s margins have peaked. Of course, the broad markets, too, have corrected by 4% in this period.

Kansai Nerolac’s operating profit margin fell to 14.1% in the December quarter, from a high of 15.8% in the September quarter. Margins may have peaked, at least in the near term, for a couple of reasons. 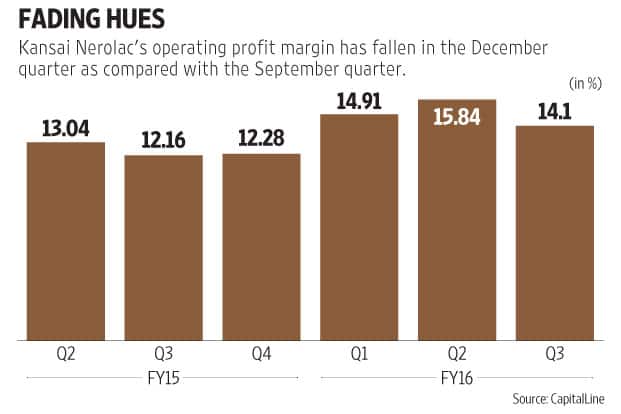 Price cuts continue to be the norm for a majority of paint companies. Kansai Nerolac has taken aggressive price cuts as it has sought to consciously pass on the benefit of lower raw material costs. In fact, its price cuts have been far higher than that of Asian Paints Ltd. While Kansai Nerolac reduced its average selling price by almost 10% this fiscal year, Asian Paints has cut prices by only around 2%.

The reduction in prices and a change in product mix led to a net sales growth of 8.7%, far lower than the volume growth of 16%. Note that lower margin paint products such as putty are growing at a fast pace, which has put pressure on pricing and has crimped margins of established companies.

The company’s management said it is looking to maintain margins at current levels. It also expects double-digit growth in the decorative segment to continue, while the industrial segment remains challenging.

The decorative segment saw decent growth in the December quarter, thanks to the festive season and the low base of last year. Decorative paints make up slightly more than half of the company’s overall revenue. The rest is from the auto segment, which is seeing low single-digit growth because of sluggish demand, especially from two-wheeler makers.

As far as the benefit of lower prices of raw materials go, while crude oil prices fell sharply in the December quarter, it was offset partly by the rupee depreciation. “Additionally, crude derivatives have not fallen as much, because some of the refineries which make these derivatives have either shut down or are diverting their production," said H.M. Bharuka, managing director of Kansai Nerolac Paints. This is another reason margins came off sequentially.

Kansai Nerolac shares are trading at 33 times estimated earnings for FY17 after the recent correction. Any further upside hinges upon volume growth recovery, especially from the auto segment, and signs that margins could revert to last year’s high levels.