Thanks for Visiting Mint
You seem to have an Ad Blocker on. Please turn it off in order to continue, or whitelist Mint
HOW TO TURN OFF AD BLOCKER
OR
REFRESH IF YOU ALREADY TURNED OFF THE AD BLOCKER
Home >Market >Stock-market-news >Market round-up: China’s economy holds momentum

China’s economy started the year on a firm footing as its old growth engines gathered pace. Steel and aluminum prices rallied and home sales remained resilient. Industrial production climbed 6.3% from a year earlier in January and February combined, versus median estimate of 6.2% in a Bloomberg survey of economists. Retail sales advanced 9.5% in the first two months, missing economists’ forecasts as auto sales dropped after a tax increase on small-engine cars. Fixed-asset investment increased 8.9% during the same period. Steadier expansion, which lifted the Bloomberg Intelligence China monthly growth tracker to 6.99% in February, gives the People’s Bank of China more room to manoeuvre as it boosts money-market rates to contain corporate leverage. Bloomberg

After two years of steady deceleration, there are early signs that investment growth may pick up in both developed markets (DMs) and emerging markets (EMs) in 2017 and 2018, said a Morgan Stanley report. Among the G4 (US, euro area, Japan, UK), investment growth should surge the most in the US, followed by Japan. From the BRIC group, Brazil, India and Russia are all likely to see a meaningful rebound, it said. However, it should be noted that investment/gross domestic product (GDP) ratios for the top 16 DM and EM economies remain below pre-crisis levels. These economies together account for close to 80% of global GDP and gross fixed capital formation. 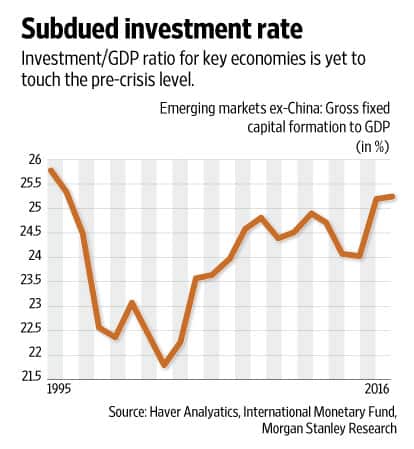 A report by PhillipCapital (India) Pvt. Ltd says that Chinese tyre imports into India have been rapidly sliding since October. Chinese truck and bus radial tyre imports have receded to 155 containers in February 2017 from about 455 in October 2016, thanks to tax raids on importers following the note ban. Another reason is that Chinese firms have hiked tyre prices by 10-15%. This will make them less attractive in Indian markets.