Should you buy new funds or old ones?

Fund houses may not be launching big bang new fund offers (NFO) these days, like the ones we saw in the years between 2003 and 2007, but NFOs are indeed back on the mutual fund (MF) street. Twenty-eight equity schemes were launched in 2013 that collected a total of about 2,700 crore, up from just 10 schemes that collected 550 crore a year before that. If the forthcoming Lok Sabha elections turn up a result that’s perceived to be positive for growth, there are chances that equity markets may touch new highs. And this might bring more NFOs. But should you even be looking at NFOs or are you better off with existing schemes?

The first and probably the only thing you should consider about an NFO is how unique it is. Ask if the NFO is different from any of the other existing MF schemes that are available at that moment. “Either the strategy or the theme has to be different; it has to be well differentiated, both in the overall market and also within the fund house," said Nishant Agarwal, senior director and head of products and family office advisory, ASK Wealth Advisors. Agarwal cites the cases of global equity funds as unique—these are fund of funds schemes that invest their entire proceeds in international schemes that are run by their international parent firms, abroad. 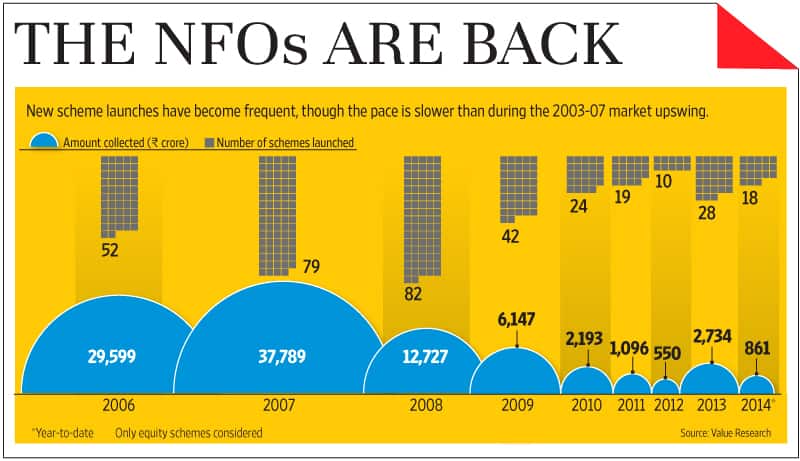 Just because a new fund house has launched a scheme doesn’t make the NFO very different. Such fund houses aim to build their product suite and launch plain-vanilla diversified equity schemes that might resemble others in the market. “For fund houses like us, our product bouquet is important. We still need to launch some more schemes to complete our suite for different market segments," said G. Pradeepkumar, chief executive officer, Union KBC Asset Management Co. Pvt. Ltd, which was launched in 2011.

In countries like the US, new schemes aren’t allowed to collect money directly from investors at the time of their launch. Fund houses need to invest about $100,000 of their own money as seed capital in all their schemes, build a track record based on this, and then open the schemes to investors. Here in India, new schemes directly go to investors and ask them to invest money.

Does that mean you should avoid new fund houses altogether? Typically yes, but you can make exceptions. If the sponsor comes with a strong brand name and a good track record, it’s possible that the new fund house, despite no track record, can perform well in the long run.

For instance, when Axis Asset Management Co. Ltd launched in December 2009, its parent Axis Bank Ltd was a strong name in the banking industry already. The MF itself, in a short span, has turned in impressive results; two of its equity schemes are already in the Mint50 (Mint’s basket of 50 schemes that we recommend to our readers.)

One of the reasons, industry observers say, behind a plethora of closed-end schemes being launched is high commissions that they pay to distributors. To be sure, fund houses pay upfront and trail fees to distributors. Some pay only trail fees. As a ballpark, fund industry officials say that equity funds pay 75-100 basis points (bps) as upfront commission and another 50 bps as trail fees. Debt funds pay 50-75 bps as upfront charges and 40-50 bps as trail fees. A basis point is a hundredth of a percent point.

Since closed-end funds come with a fixed tenor, investors cannot exit before the maturity period. That’s why some fund houses prefer to pay the subsequent years’ trail fees at the start of the scheme’s tenor, popularly known as “upfronting commissions" in MF parlance.Between the years of 2012 till date, 26 closed-end schemes were launched that collected about 2,626 crore, as against 30 open-ended schemes that collected about 1,500 crore.

Upfronting trail fees can have serious consequences, as it happened when some fund houses had launched the Rajiv Gandhi Equity Saving Scheme last year for the first time. Mint was the first publication to report the trend (http://tinyurl.com/agpbr4u). Some fund houses had privately claimed to us at the time that they earned very little or nothing on such schemes to push their sales.

Pradeepkumar claims that upfronting as a concept “is okay when somebody sells a closed-end fund as investors’ money gets locked in and if fund houses can work out a payment structure that’s not harmful to anyone". “But fund houses should not suffer a loss. We don’t do that kind of upfronting where we run a loss on the scheme that we manage and sell," he added.

We haven’t yet seen a barrage of NFOs hit the market like in the olden days on account of poor market sentiment, but two things have happened in recent years that had a say in the controlled number of NFOs.

Firstly, the Securities and Exchange Board of India (Sebi), has been known to be selective in giving approvals to fund houses to launch new schemes. Secondly, many closed-end equity schemes are coming up with sharper focus; pay out dividends (and return profits as and when they happen) and close the scheme and redeem investor’s money once the tenor is over. Recent closed-end scheme launches by IDFC Asset Management Co. Ltd and ICICI Prudential Asset Management Co. Ltd, for instance, had stated in their offer documents that they would not convert the schemes into open-ended ones after their respective tenors are over.

“Our whole idea was to offer portfolios that would not replicate our existing portfolios. We don’t want our closed-end schemes to live beyond their tenors, otherwise after, say, three or five years, we’ll end up having plenty of schemes and they’ll all look similar. These are thematic funds with a finite life and we are happy with that," said Kalpen Parekh, CEO of IDFC Asset Management.

Whether the industry has learnt from its past mistakes is too soon to tell, but with Sebi’s tight monitoring and a sense of maturity in some sections of the industry, your choice today isn’t as tough as it was in the previous bull run.