At Titan Co. Ltd, the mood has only become more sombre. It was known that the lack of redemptions from the Golden Harvest Scheme (GHS) would tell on the company’s June quarter numbers. What came as a surprise, however, was that demand could be such a party pooper.

Titan’s efforts to boost sales through promotions and lower making charges in gold jewellery did not yield glittering results. In fact, “walk-ins" were lower and rural demand, too, was affected due to lower realizations and monsoon conditions, says the company.

In its mainstay jewellery business, revenue fell 11% year-on-year and accounted for about three-fourths of the total revenue. The company attributes that to poor consumer sentiment, lack of revenue from GHS and lower gold prices. Sadly, despite the drop in gold prices, customers have adopted a “wait-and-watch" approach. Nevertheless, increase in the share of studded jewellery to 29% versus 23% in last year’s quarter offered some relief.

Still, volumes declined yet again. In the March quarter, jewellery volumes had declined by 11% and in the June quarter, they fell by 10%. As a result, jewellery Ebit (earnings before interest and tax) margin at 9.2% is the lowest among the previous eight quarters, according to Titan’s investor presentation. 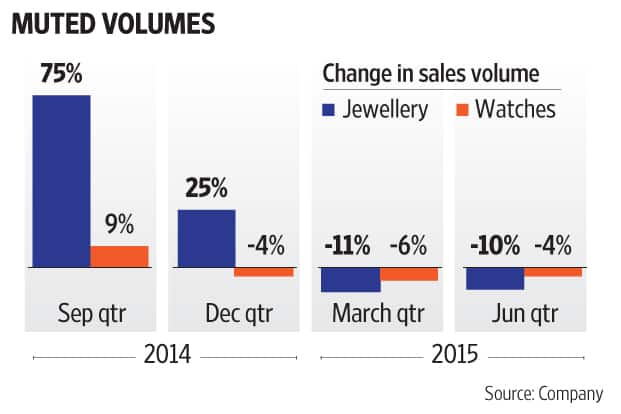 The fate of Titan’s watch business, which contributed 18% to revenue, wasn’t dramatically different. Sure, watch revenue increased 9%, higher than the 2% improvement seen in the March quarter, but volumes declined 4% in the June quarter, marking it the third straight quarter of decline. Titan’s eyewear business performed, but it is currently too small to make a meaningful difference.

Small wonder that Titan’s shares have fallen 6.5% since results announcement on Friday. And, of course, estimates are being slashed. So far this fiscal year, Titan’s stock has fallen 19% in comparison to a 0.7% gain in the S&P BSE 100 index.

Unfortunately, there is little to suggest a reversal in stock performance trend unless demand recovers. Analysts maintain that the current quarter would be rather subdued as last year’s September quarter was a high base one. Therefore, investors must watch out for the company’s December quarter performance for signs of demand revival.

Currently, Titan trades at 30 times its estimated earnings for this year. In the June quarter, net profit declined 15% to ₹ 151 crore.