Home >Market >Mark-to-market >Are the colours fading for Asian Paints?

Are the colours fading for Asian Paints?

Shares of Asian Paints Ltd have dropped 16% after touching an all-time high in January as consumers continued to hold back on discretionary spending. Urban recovery is not in sight while demand from smaller towns, which was driving paint growth, has slowed due to lower rural spending by the government.

Brokerages have cut earnings estimates for Asian Paints by 3-15% on expectations of slower revenue growth. Hopes of a revival in consumer demand have been scaled back. Consolidated net sales grew 6.9% and, at ₹ 3,490 crore, were below estimates. 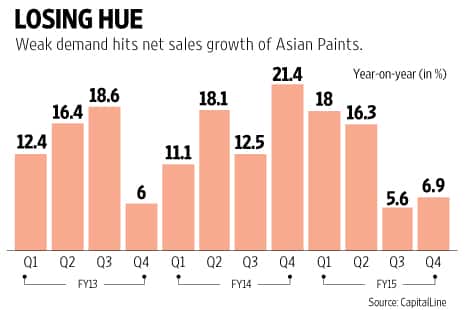 The management said that significant improvement in domestic demand may take some time and recent forecasts of a sub-par monsoon might affect rural demand. Asian Paints has reduced prices for paints by around 2% since February to pass on the benefit of lower input costs including those of crude oil and titanium dioxide.

Revenue for the company’s industrial segment also remained weak as infrastructure activity on the ground is yet to take off.

Jefferies Research lowered its 2015-16 margin estimate by 70-200 basis points (bps) because of the bleak demand outlook, after the earnings announcement. Margins grew 110 bps to 15.8% in the quarter ending March, lower than expected because of muted volume growth.

One basis point is a hundredth of a percentage point.

Even after the slide, shares of Asian Paints are trading at rich valuations of 37 times the current fiscal year’s expected earnings. Muted volume growth will continue to remain an overhang on the stock and margins may also come under pressure if crude oil prices continue to rise and the rupee depreciates further, said analysts.