Thanks for Visiting Mint
You seem to have an Ad Blocker on. Please turn it off in order to continue, or whitelist Mint
HOW TO TURN OFF AD BLOCKER
OR
REFRESH IF YOU ALREADY TURNED OFF THE AD BLOCKER
Home >Market >Stock-market-news >Select mid-cap, small-cap stocks fares worst in stock market correction

Select stocks in the small-cap and mid-cap indices of the BSE have taken the brunt of India’s stock market correction that started in early March, even though these indices themselves performed better than the benchmark Sensex during this period.

The pain is concentrated in the usual market underweights such as small state-owned banks, non-banking financial companies, engineering companies and software firms, a Mint analysis showed. 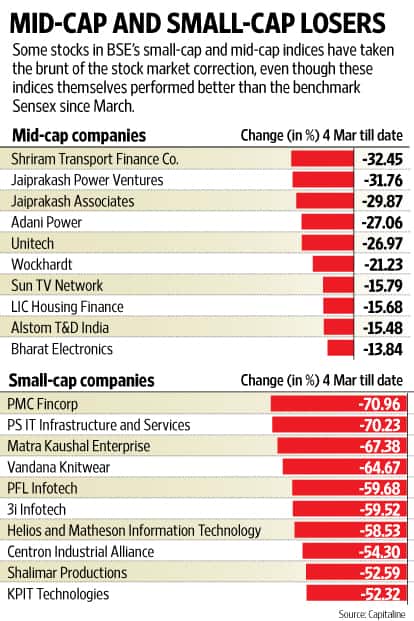 The sharp drop in some of these companies contrasts the performance of the mid-cap and small-cap indices, which have lost only 3.1% and 5.9%, respectively, since 4 March, while the Sensex fell a steeper 7.4%.

Why did these stocks take the heat?

“A lot of expectations had built up in the market. There were sectors where fundamentals in terms of results have not been great," said Sunil Singhania, chief investment officer of equity investments at Reliance Mutual Fund.

One such example was Shriram Transport Finance Ltd, the top loser among mid-cap stocks since 4 March with a 32.5% decline. The country’s largest truck financier reported a 73% drop in its consolidated net profit for the quarter ended March due to the poor performance of its wholly-owned subsidiary Shriram Equipment Finance.

Engineering and construction firms, financial companies—more specifically state-owned banks—textile firms and small pharma and software firms were among the key losers in the mid-cap and small-cap segments.

“Smaller PSU (public sector unit) banks, IT, engineering firms and the like all had a forgettable quarter in terms of their results, and that is getting reflected in their prices," Singhania added.

The BSE Realty and BSE IT indices have fared the worst among BSE’s sectoral indices since 4 March, losing 13% and 12.6%, respectively.

Ajay Bodke, head of investment strategy and advisory at Prabhudas Lilladher Pvt. Ltd pointed out that “the perspective is important".

“Some of these stocks had given unprecedented rise since the rally begun, a sharper correction was inevitable when the market at large corrected," Bodke said.

“Some of the names were appearing frothy because of large speculative fervour built in them. Whenever panic sets in, people opt for stronger and quality names and shun the relatively weaker ones," he said.

PMC Fincorp Ltd was the worst performing stock in the small-cap index, losing nearly 71% since 4 March. In the March quarter, the company posted a net loss of ₹ 2.61 crore compared to a net profit ₹ 0.58 crore in the same quarter a year before.

“If the market environment is positive and stable, some of these smaller companies will find capital coming towards them, and will drive the prices higher, as there is a lot more scope for these companies to expand and deliver. Likewise, when a rally fizzles out, they become the worst casualties," said Rakesh Rawal, head of private wealth management at Anand Rathi Financial Services Ltd.

“I think they are fantastic opportunity to enter into at this point. Mid-cap and small-cap are good bets well along the large-caps at this time after the recent market correction," Rawal added.